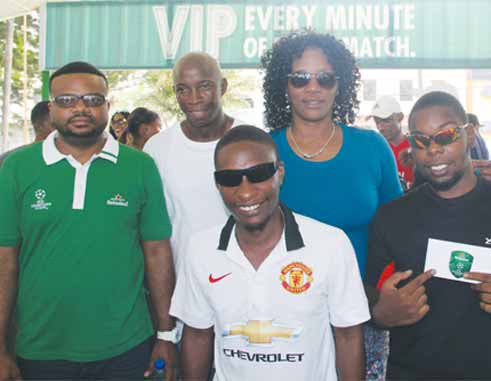 SOME came to passionately root for their team while others simply came for the thrill that accompanies the game. Yet, for others it was a chance to hang out and mingle with friends while enjoying the most popular and entertaining sport in the universe.

Last Saturday more than 180 million football fans worldwide, viewed the UEFA Champions League final between Juventus and FC Barcelona. Here in Saint Lucia Heineken threw a party where fans could enjoy all the excitement in the company of good friends, football lovers and fans.

The occasion was the annual viewing party; put on by Heineken at the Derek Walcott Square where scores gathered to view the game on the largest big screen this side of town.

The event was open to the public, however, a number of lucky winners were treated at the VIP Tent. Those persons had won themselves VIP tickets during radio promotions leading up to Saturday’s event. In addition, there was also a grand supermarket promotion that was won by Ms. Carol Gideon. She had the added privilege of taking five friends with her to the viewing party, VIP style.

Winners, WLBL staff, media personalities and invited guests took in all the action from the elevated stage while enjoying ice cold Heineken, eats and other beverages, compliments WLBL.

Ahead of the kick off time on Saturday, DJ HP entertained the crowd along with MC Jordan who also provided some entertainment as well as Heineken giveaways during the half time interval. Heineken also set up a FIFA video game booth at the Square, as an added attraction to patrons. This too was a hit.

In the end Barcelona walked away with the Champions of Europe trophy for a fifth time, defeating Juventus 3-1. Their passionate fans celebrated, but no one seemed dejected as Heineken kept all spirits alive. DJ HP also kept the action going, with Soca Monarch Ezra-D Fun Machine throwing in some energy alongside new Soca artiste CJ.

The Heineken party continued long after the final whistle was blown at the Olympiastadion in Berlin.