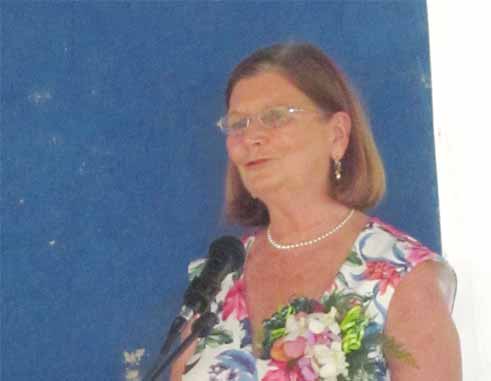 Mrs.Archibald was born in York, England and educated as follows:

She worked as a private teacher in Geneva Switzerland for one year (1970 – 71), She emigrated to Montreal, Canada in January 1972 and worked as a kindergarten teacher in an inner city pre-school until 1976 when it closed. She became interested in working with special needs children and was employed at John Birks Centre, a residential home for children with severe disabilities, from 1976 until 1986.

During this time she was enrolled at McGill University and graduated with a B.ED. in early childhood education and a post graduate certificate in Special Education.
Archibald first visited St. lucia in February 1979 during independence and fell in love with the island. She married Edwin Archibald in 1981 and came to live in St. Lucia in October 1986. She became administrator of DunnottarSchool in January 1987 where she has been ever since. During this time the school has grown from just over 50 students and 8 teachers to 85 students, 19 teachers and 3 teacher’s aides at present

Archibald formerly served on the Board of Directors of the National Council of and for persons with Disabilities and currently serves as the Director of very special arts and on the National Community Foundations’ Committee representing persons with disabilities. She is a member of pawasol pour timamai.

The outpouring of testimonies and praises from both teachers and students was inspiring and emotional and there were many a tear in the eyes of the audience.

Carolyn Archibald is a tower of strength who under trying circumstances, limited funds, and a deteriorating building has transformed the school to being a stepping stone for many of the students to accomplish things that would have been deemed impossible due to the restrictions that many of the children faced. she broke barriers and through determination and fortitude,working with a dedicated team of teachers, many students have been integrated into the general school system, become musicians, learnt skills and taught how to be self sufficient in today’s challenging world.

This lady should be known to all st.Lucians as someone who has dedicated 27 years of her life to the betterment of our special needs children who unfortunately are often overlooked in the grand scheme of further education.

It is important to note that when the children reach the age of 18 and have to leave the school, there is no provision made for them to blend into society and they are often left with little or no options to further themselves in todays world.

Surely, it is persons like Carolyn Archibald who should be included in the list of awards to the service of this country and I trust that her name will be first on the next list.