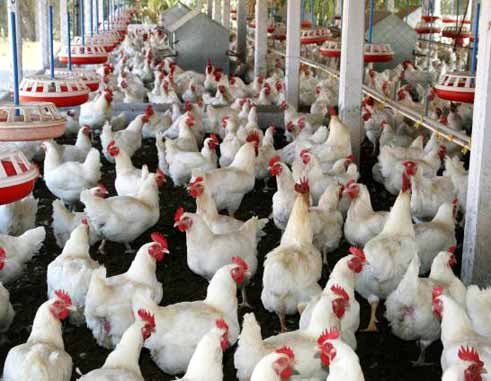 ALL of a sudden, everybody’s crying about or afraid of something foul about chicken. I don’t know if it has anything to do with the fact that we no longer call a fowl ‘a fowl’. But, somehow I think the fowl family feels it has for too long been crying foul, with no attention and no redress, so it’s come around now to taking its historical frustrations out on chicken.

Don’t understand me too fast – to borrow a term from a burrowed bard. Let me explain.

Eons ago (when I was growing-up in Faux-a-Chaux), every morning my father would give me a pan of ‘fowl food’ and send me to ‘go and feed the fowls.’ The fowl food was graded according to the size of the bird: ‘Startina’ (for chicks), ‘Growina’ (for growing ones) and ‘Layina’ for hens ready to lay. And then there was the multi-grained ‘Scratch Grain’ (with corn, rice and other delicacies in the kingdom of beaks) that the cocks, hens and all other local fowl species would all fight over.

Back then, roosters were called ‘fowl cocks’ and they were grown and fed, as much to eat as to fight. Yes, Sundays (and particularly holidays) featured illegal cock fights at various off-road locations around the countryside. Back then, no one knew of animal rights or cared for the amount of blood shed, spread and spilled by the battling birds in the cockfight ring. All that mattered was that your cock was sufficiently well-armed with razor-sharp spurs tied to its kick-boxing feet.

At my tender age, I would almost choke on upcoming vomit watching the cock handlers pour different leaves and spices into their mouths, load it up with a mouthful of strong white rum, then spit it into the cock’s opened beak before spit-spraying the rest into the cock’s entire visage. It disgusted me, but it seemed to work, as the sprayed cocks always seemed to win. (I was later told it was because they fought with more rage, thanks to the sprayed stuff.)

Up until a Trinidadian guy called ‘Full-o-Pep’ introduced the various brands of ‘fowl feed’ earlier named, no local Saint Lucian referred to a fowl as a ‘chicken’. They would refer to baby ‘chicks’, but not ‘chickens’.

By my recollection, fowl turned to chicken after local supermarkets replaced grocery stores and retail shops; and fowl fell of the local menu language as soon as chicken started being sold in plastic bags in supermarkets as ‘frozen foods’.

Before fowl became chicken, if you wanted to cook and eat fowl, you bought or got one, broke its neck, feathered it with hot water, sliced it open, removed the guts and other insides, chopped it into parts like wings, legs, thighs, necks, chests and breasts — even the backside, and there was nothing foul about that.

People hardly grow chickens for home consumption these days. After all, it’s so cheap.How many of your neighbours grow chickens to feed the family? Who wants to do that when five dollars chicken backs feeds a family? And who wants to pay four times the cost of foreign chicken for one box of local chicken?

But then, since fowl became chicken more than 40 years ago, chicken has become a big hit globally – so much so, that a song about chicken became the Number One funky hit song globally. It was appropriately entitled ‘Funky Chicken’ and it was by a one-hit hit man called Rufus Thomas.

That was back in the 70s (yes, since in the last century…) Since then, we on this little rock have set a world record for eating chicken. Saint Lucia has — for as long as I have been a journalist – the record of having the highest consumer rate for chicken per head of population. We’re first in the OECS, then in CARICOM; and according to those who know, we can enter the World Guinness Book of Records for the nation that eats the most chicken in the world. And yes, we can also crown ourselves as the ‘Rock of Cocks — and Hens’ or the ‘Kingdom of Rooster Boosters’ – or some other similar but more colourful or feathery plumes for the national chapeau.

Today, our local chicken market is so huge that people in the chicken business are crying foul over fowl, and gearing up for more than just feathered pillow fights over chicken.

Importers of cheaper foreign chicken are being asked to buy more local chicken before importing foreign. But, they argue, there’s nothing local about ‘local chicken’. Those in the business of growing, processing and packaging more expensive local chicken for sale are saying in response, that the importers only want to keep flooding the market with cheaper chicken, even if local poultry farmers end-up having to eat their own slaughtered chicken feathers.

With the two sides gearing-up for a veritable national ‘Bataille Cock’ that could have featured more than just sharp cocks’ claws, government has stepped in and asked the feathered foes to find words and ways to agree not to engage in a ‘cock fight’ that could — and would — leave too many chicken lovers nursing fouled palates.

Back when chicken was foul, no one talked about food security. There were no chicken diseases, no HL-N1 Virus, no Bird Flu, no antibiotics used in broilers, no chicken giving hormone imbalances, no chicken washed in arsenic or chlorine, nothing that required that we don’t eat or be afraid to eat local fowl. You wanted to eat fowl? You just had to decide whether you wanted “un poule” or “un cock”.

Now, ‘chicken backs’ has replaced ‘saltfish’ on the national dish. ‘Chicken Backs’ were never prepared for human consumption in the USA. It is also less nutritious in content, thus less healthy — and not subject to as rigorous quality control as imported ‘premium’ parts or local chicken. But try telling that to those selling and buying ‘Roasted Chicken Backs’ or “Barbeque Backs’ at Gros Islet on Friday night.

‘Chicken backs’ is such big business these days that I picked-up a slick post-card-size poster advertising a business offering to ‘clean your chicken backs’ for you. Yes, a business cleaning backs for pay. Clearly, these visionary entrepreneurs have done the Maths – and, understanding the aversion of the new adherents to ‘backs’ to being seen cleaning the stuff, I’m sure the returns will be more than chicken feed.

So folks, with all the hullaballoo about crying foul over fowl, all the talk of ‘fowl-pluckers’ feathering lucrative nests and contending forces feathering pillows to fight fowl wars, sometimes it seems to me like what’s really at stake here is the future of fowl versus the future of chicken. (Same you say? ‘Meme bête, Meme pwel’? If so, then why can’t they coexist and live in peace side by side?)

But it’s not just a war over chicken or fowl. It’s a fight over the money – prices and profits, investments and returns, survival or bankruptcy.

Local producers say they have long been absolutely disadvantaged, their growth stifled by the cheaper prices of imported chicken. To help promote the local industry and give it a fair share of the market, government introduced a policy requiring chicken importers to first purchase 25% locally. It has now increased that amount to 40%, much to the understandable consternation of the importers, who have threatened to engineer a price increase if the policy is implemented without their consideration.

The time-off called by the government allows the ‘local chicken’ stakeholders to cluck the benefits of their products as loud as possible for six weeks. Similarly, the importers have equal time to make their case as the major suppliers of chicken locally, by far.

The local producers have made the salient point that the only way chicken prices will increase is if the importers and distributers of the frozen stuff from the USA decide to shift their profit margins, as there’s been no increase in the cost of local chicken. On the other hand, the importers are skeptical that the local producers may not be able to supply the prior increased allocations without hindering their orders.

Consumers have so far not been sufficiently considered by the warring sides. Only now – after the implementation date has passed – are we hearing the antagonists and protagonists starting to make their cases.

It can only be expected that in the next five weeks consumers in general – and not only eaters of chicken – will (hopefully) learn more about the pros and cons of imported and local chicken so they can make healthier and/or more economical/affordable choices when buying chicken for this year’s Carnival, JounenKweyol and Christmas.

Yes, the transition from fowl to chicken has been quite foul in certain respects, but in today’s circumstances there’s nothing foul about learning the difference between local fowl and imported chicken without any side in this economic cockfight cruing ‘Foul’ or being accused of fowling the other!