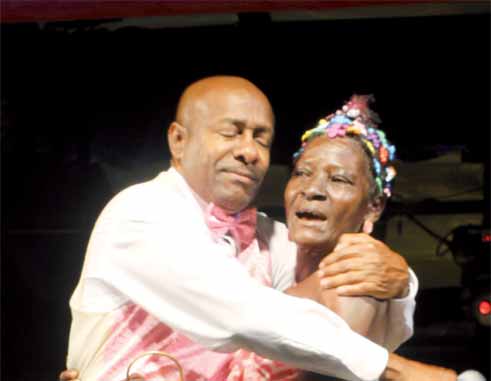 START has had its second showing for the Calypso Season and the question lingers, “Who stole the show on the given night?” While many may find it satirical, I dare say, the night belonged to Patra. She was confident, the band was in sync, and she had the audience eating from the palms of her hands. I don’t think there was one patron who was not hooked by the line, ‘Hold Your Man Hand’.

Then there was the emcee who did a fabulous job. He was on target throughout the night. If this was a comedy show, Errol would be going home with the cake.

But it was a calypso show that started on time with the national anthem followed by prayer. And what a prayer it was! In the vein of the theme of the prayer we must ask, What are we building?

If anybody got it right that night it was the guest artist, Mighty Sizzler of the R. C. Boys Primary. For sure some of the ‘seasoned’ calypsonians need to attend his “Kaiso Academy”. He showed them how it’s done, from attire to musical composition to stage presence and movement. His line of advice rings true, we need more creativity and less vulgarity.

Some themes, such as Realist’s “Stop the Violence” must be given a different treatment.

The sound was on point. The musical backup and audio were in line but what was lacking was the quality of material rendered. There is a need to augment the calibre and cadre of writers. It is time that the fraternity turn to organisations like the Saint Lucia Writers Forum. I hear the lament. “Does Lord Help Me have to write for everybody?” and “Is a song only good if Happy writes it?”

Creativity must be explored in musical rendition and arrangement as signalled by the crowd’s complaint of Ready’s monotony.

Of course there are lots of things that must be done to improve the art form but a lot rests on the shoulders of the calypsonians, such as being ready. The lack of readiness shows, when you have a recycling of calypsonians from the last show, when Bingo continues to forget his lines and Educator is inordinately late for the show.

The live streaming is a plus and should aid in revenue generation so that the artistes get paid (there are artistes who still have not got paid from last year but that’s for another show). While it is a bit of an inconvenience the policy of “no eats and drinks” in the auditorium should be maintained. A projected screen outside would help. With a ninety percent capacity crowd, START has a good thing going but only consistency and quality will assure a successful season.

Here’s to an improved showing next time around.