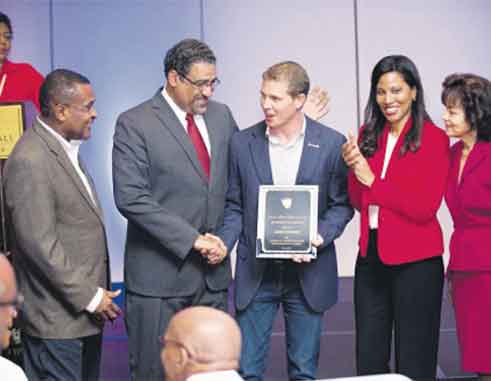 ADAM Stewart, CEO of Sandals Resort International, was named Hotelier of the Year by the Jamaica Hotel and Tourist Association (JHTA) at their Annual General Meeting held last weekend.

Stewart, 34, is the youngest person to have ever won the award and was born in 1981, the year his father, Chairman Gordon “Butch” Stewart founded the company.

Upon accepting the award from Jamaica Minister of Tourism and Entertainment Dr.Wykeham McNeill and Jamaica Director of Tourism Paul Pennicook, Stewart said he was inspired by Jamaica, the quality of its tourism product and the people he worked with.

The CEO also expressed his appreciation for the many other Caribbean territories where Sandals Resorts have been welcomed and where he also oversees operations as Chief Executive Officer.

“So many of us here, we work together, we do business together we are friends, we are family,” said Stewart.