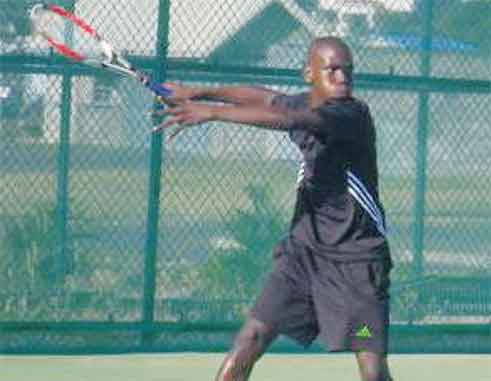 THE curtains came down on what has been dubbed a successful Renwick Open as Meggan William defended her ladies title defeating Netanya Faissal in straight sets in thefinals at the Kenneth ‘Wriggler’ King Multi Purpose Court in George V Park.

Despite the margin of victory it was an entertaining match of shot making from both players, but the experience of William proved to be a bit too much for Faisal who lost in straight sets 6 -1, 6 -1.

The men’s final saw Keric Duval taking on Keiran President. The first set was very intense with both players firing away with some heavy hitting and selective serve and volley tactics. In the end Duvall blinked at 5 games all losing his serve and allowing President to hold serve to secure the first set 7 – 5. President’s onslaught proved to be too much for Duval and he lost the second set 6 – 0 handing President his first Renwick Championship title and tournament win for the year.

The highly anticipated doubles event between Vilan Edward and Celsus Leon against Greg Mathurin and Anselm Mathurin proved to be quite a fiasco as both teams came out trash talking each other. Leon and Edward looked very impressive in the first set pouncing on anything within their reach resulting in them taking the first set 7-5.

The Mathurin cousins held their nerve and stubbornly refused to melt under the onslaught of the men in black. They held serve when they had to and broke services when the opportunity was presented. They took the second set 6-2. Tempers flared at one point in the match and it was just what the Mathurins needed to fire them up and take the wind out of Leon and Edward allowing them to win the third set 6-1 and claim the Doubles.

Meanwhile, most of the players who competed in the tournament are expected to return to the venue for the commencement of the 2015 Voyager Open slated for Saturday June 13.