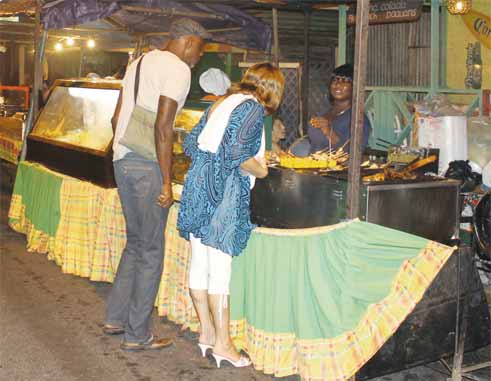 BACK to back hostile incidents during Gros Islet’s Friday night street party will not bring an end to the 30 year old event. However, its makeover, which has been ongoing for the past three months, will most likely be accelerated.

The VOICE has learned that a number of measures aimed at rebranding the event to give it a better appeal to locals and visitors alike are presently being worked on by a new Board of Directors of the Gros Islet Constituency Council.

Further that the incidents, one of which included gunplay, has caused the Board to take a harder look at the security measures that are in place for the event.

Just last Friday an altercation between a man and a woman broke the normal atmosphere of the night. A crowd quickly gathered. Howeve,r reports of the incident were varied with some claiming that patrons were throwing bottles and stones at each other.

Both the police and the town’s mayor, Alison King denied those reports with the latter claiming that the incident was contained by police officers who were on the scene and that only two persons were involved. They were detained by police.

Gros Islet police also confirmed that the incident was not gang related, as was previously reported elsewhere, and that only the detainees were involved.

They further claimed that the previous incident which involved gunplay and which resulted in five men sustaining gunshot wounds to various parts of their bodies, and the incident last Friday night were unrelated.

Last Friday night’s incident caused the street party to end prematurely, a decision taken by the Sargeant on duty that night. Mayor King applauded the decision saying that the event’s early termination was both prudent and consistent with the Sergeant’s obligations to crowd safety.

“The street party management committee recognizes that the weekly anticipated event does not simply belong to the people of Gros Islet but it is also an event of national importance, as a key component of our tourism product,” King said in a statement released to the media Tuesday.

Police reported that one of the two persons involved in last Friday night’s incident was arrested but has since been released. However, charges of wounding and disorderly behaviour will be laid against that person.

A source connected with the new plans for the event told The VOICE that the attempt to revamp the street party will result in more vendors’ participation and the inclusion of more streets which would remove the congestion on the town’s main thoroughfare.

Another major task of the Council is establishing ownership of the event.

The VOICE learned that in the event’s early years, the Council owned it, however, due to its “weak leadership” back then the Gros Islet’s Vendors Association took it over. But the Association’s lack of coordination and forward thinking caused the event to deteriorate. The Council is now trying to regain ownership.

“The process is close to completion. Not only are we registering it, we will be rebranding the event as well,” our source said.

Close to completion is the spread of activities each Friday night to more streets in the town. The Council is working on the event’s image which is all part of its rebranding. Additional lighting has already been installed in the various areas where activities will be spread to, while poor lighting in other areas has been improved.

The Council, with external help, has been working with vendors by holding indoor training programmes which include marketing, food handling and customer service.

The Council has set up a management committee for the event involving stakeholders like the Saint Lucia Hotel and Tourism Association, the Royal Saint Lucia Police Force, the Gros Islet Vendors Association and others.

The committee is tasked with improving the safety and security of patrons, ensuring that mass crowd event guidelines are compliant and certifying its sustainability.

“The committee has been working assiduously to implement national and international standards to improve the weekly event,” King said.