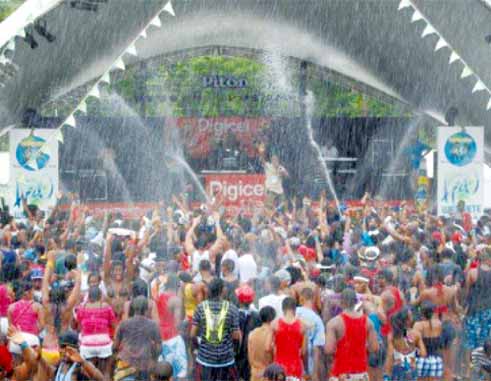 THE highly anticipated and ever popular H2O “Wet Fete” event which was scheduled to take place at Samaans Park on Sunday has been cancelled much to the disappointment of thousands of patrons.

It’s all because of the shortage of water caused by the ongoing drought wreaking havoc over the island.

Wet Fete has been a major event on the carnival calendar for several years and has grown to be one of the season’s most popular attractions as well with thousands of patrons paying between $75 and $200 to attend.

The cancellation decision was taken on Tuesday afternoon after the Government stepped in and deemed the thousands of gallons of water in storage to be used at the event, too precious a commodity to put to waste.

Organizers of the event are said to be facing a serious loss of money after full arrangements were all set for the big day and patrons who had already purchased tickets.

The position to cancel the event has brought mixed reactions among the public. Although this announcement came as a sharp blow to the entertainment company, they have been applauded by supporters for their understanding of the gravity of the water problem facing the country

But in social media postings, many fans vented their displeasure. Said one:

“If the promoter is paying for the water being used at his event then I fail to see what the issue is…yeah, there is a crisis which is the responsibility of WASCO to supply water to who needs it…the promoter is importing water and we still have an issue?…wow…so the government not doing their job efficiently and making it seem that water is being wasted in time of a drought…so people supposed to put their lives on pause because the government not doing their job…sighhh…#POLITICS”

Another said: “Not just the fact that he was paying for his water, he was bringing down a barge of 500,000 gallons of water where he would only be using 100,000 for Wet Fete and offering the rest to WASCO granted a reasonable arrangement. How beneficial would it have been for the country gaining 400,000 gallons of water during this alleged drought…… My point is, since there was also a level of negligence by allowing the event to be on the National Carnival Calendar of activities, why not allow the license to be expressed at this time considering the given circumstances, not to mention investments by all parties involved……. Same people who will act as if they are concerned about unemployment and support for the art form. Real eyes realize real lies….”

There were also alternative suggestions, such as : “PUMP WATER FROM THE SEA!!!….OR MOVE TO Pigeon POINT”.

In a press statement Monday released by Blueprint Entertainment Inc., the management company behind the event, Director Kurt Elibox said:

“At Blueprint Entertainment Inc. we pride ourselves in being good corporate citizens and we place great emphasis on our social responsibility to our country and fellow citizens.

“In compliance with the declaration of water emergency issued by the Minister responsible for Agriculture, pursuant to Section 10 of the Water & Sewerage Act Cap 9.03, we have decided to cancel our event H2O Wet Fete. Persons who have purchased tickets are hereby requested to return to the outlet where the ticket was bought to obtain a refund upon presentation of the ticket”.

Elibox assured that Blueprint Entertainment Inc. had explored “every possible option” of acquiring the water supply required to make the event happen, but he said all options were turned down again, due to the declaration of water emergency.