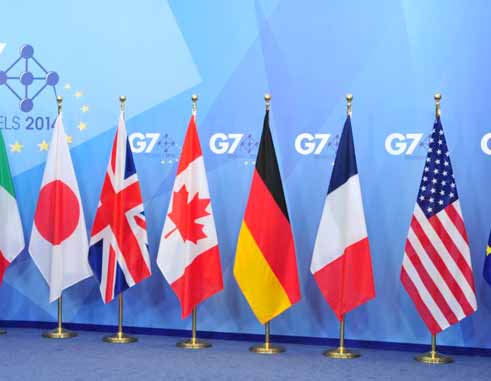 THEY’VE got size, demographics and economic momentum. Together they comprise more than 3 billion people or 41.4 percent of the world’s population, more than a quarter of the world’s land area over three continents, and account for more than 25 percent of global GDP. Despite the fact that much of the political power today is concentrated in their hands, they were noticeably absent at the G-7 summit held from June 7-8 in the picturesque SchlossElmau at the foot of Germany’s highest mountain, the Zugspitze.

Yes, dear reader, you guessed right, I am referring to the BRICS group of emerging economies – Brazil, India, Russia, China and South Africa. Does it take a rocket scientist to figure out that the balance of power, if not already shifted, will eventually be in favour of these emerging economies? These five nations have a combined nominal GDP of US$16.039 trillion, equivalent to approximately 20% of the gross world product and an estimated US$4 trillion in combined foreign reserves. Now that’s significant.

The idea of a G-7 club of industrialized countries is one that should have died long ago, but just keeps shambling along. Currently, given the omnipresent threat of global terrorism and the gravity of the world’s economic and environmental concerns, it’s kind of farcical and disingenuous to invite only leaders of the so-called G7 nations (US, Germany, UK, France, Italy, Canada and Japan) to partake in such a crucial and timely summit. Notwithstanding the fact that seven other leaders mostly from African countries were invited to observe on the sidelines, what has constantly discombobulated critics and commentators alike is the practice of inviting both the European Commission and European Council Presidents to contemplate solutions on behalf of the world. Why is the European Union represented in addition to having four individual EU member states and two others as observers? That is unacceptable. Besides, why is Italy, long considered “the real sick man of Europe” (Tsar Nicholas I of Russia coined the phrase to describe the Ottoman Empire) with a somnolent economy even a full-fledged member of this rich country club? Facing their own economic demons in the form of a currency and debt crisis and crippling unemployment, what advice can a sclerotic and ageing Europe provide to some of the rising stars of Asia, Africa and South America?

Given that the G-7 countries collectively account for 32% of global purchasing power parity (GDP) and represent only about 1.2 billion people, do they have the authority to speak and plan on behalf of the rest of the world? Without the active participation of the BRICS economies, the G-7 could not have hoped to achieve much at the summit, for they would not have had the mandate to tackle global crises like Ukraine unless Russia, China and other world powers were present.

As you can well imagine, the main focus of the summit was the global economy as well as other key issues regarding foreign, energy, security and development policy. Without the collective weight of China, Brazil and India that account for more than 3 billion of the world’s population, a global agenda put together by mostly European countries outlining the next set of development goals and how to finance them, appeared to me at best a fleeting illusion. How on earth can such an outfit, to all intents and purposes, address critical issues such as climate change, trade, the weakness of the global recovery, combating systematic tax evasion and tackling inequality without the structural and strategic input of the BRICS economies? The Chinese and other non-Western powers share responsibility for the world’s problems and it’s absurd that they should be kept out of the “big” picture.

Larry Elliott, a veteran and respected business journalist with the British Guardian recently expressed these sentiments regarding the G-7: “The get-togethers started after the first oil shock in the 1970s but have long since ceased to matter. The G7 is a moribund institution and has been for the past decade. As an instrument of the internationalism it was set up to pursue, it is hopeless. It should be scrapped.”

We no longer live in the 19th century, a time when the major powers met and redrew the map of the world. The new zeitgeist demands that we make institutions and mechanisms fit the new global realities and the new balance of power. There has been a fundamental change in the international economy, especially in the last decade. The Great Recession of 2007-08 led to the downgrading of Greece from developed country to emerging market status. Emerging and developing countries, especially the BRICS, have significantly increased their weight in global GDP and in global economic growth; in particular, they have been responsible for most of the growth in the world economy since the 2007–08 crisis.

Just recently the BRICS countries created a $100 billion BRICS Development Bank and a reserve currency pool worth over another $100 billion, which will no doubt counter the influence and seriously challenge the World Bank and the IMF, symbols of America’s global financial hegemony. The new bank’s primary focus of lending will be infrastructure projects and its modus operandi will seek to submerge the current philosophy of the World Bank and the IMF that has subsidized economic dependency and subservience.

On climate change, the G7 leaders pledged in a communique after their two-day meeting to develop long-term low-carbon strategies and abandon fossil fuels by the end of the century. But how can you discuss and develop a climate change strategy and blueprint without China at the table? As it stands today, China is the largest consumer of coal in the world, producing 18,449 TWh of the world’s total 39,340 TWh in 2009. It is one of the top emitters of all greenhouse gas emissions including building and deforestation. In fact, a new study by the London School of Economics confirms what has been increasingly clear to outside observers: “Whether or not the world will avert catastrophic climate change is now, to a large extent, in the hands of the Chinese.” According to the report’s authors, “to reduce its emissions at a rapid rate, post-peak, China will need to deepen its planned reforms in cities and in the energy system, supported by a concerted approach to clean innovation, green finance and fiscal reforms.”

Further, how is it practical to discuss global energy policy, energy security and oil economics without indulging the attention and participation of influential representatives from the Arab world? It would have been both wise and farsighted to invite the Arab League given the unprecedented threats and instability spreading through the Middle East. Such a move would have certainly been in the interest of superpowers like China, Europe and the USA who have several interests in this vast rich region, and are seeking to expand their influence over the oil rich countries.

Meanwhile there is “a cold peace” between Russia and the West, and presently the G-7 is pondering what they should do about Russia’s aggressive behaviour in the region. But not only have the present sanctions had little impact on Russian policy, it has also not improved Ukraine’s situation, which in all respects remains dire. As predicted, the G7 summit has ended with a demand to extend sanctions which are achieving none of the objectives for which they were imposed.

On the eve of the G-7 summit in Germany, the Frankfurter Allgemeine Newspaper (FAZ) opined: “One should not underestimate Beijing and Delhi’s claim and desire for making this new century their own. They’re realizing their own strength over the rest of the world, be it the form of downward wage pressure, competition for highly qualified jobs, or sources of energy. Both countries have quietly been expanding their international influence. We believe hand in hand, they can change the world in the not too distant future.”

The G-7 has for a long time lacked the legitimacy, unanimity and leadership to tackle the world’s many intractable problems, particularly cutting carbon emissions and reducing inequality. Clearly there is no future for an anachronistic and self-appointed group of supercilious nations that seek to pontificate on democratic and economic issues to the rest of the world despite the economic mess in their own homes and backyards. The G-7 is irrelevant and the idea simply perpetuates a global imbalance, and therefore should be scrapped altogether in favour of a more permanent and broader G-20 that reflects a more legitimate and realistic consensus of world opinion and circumstances.