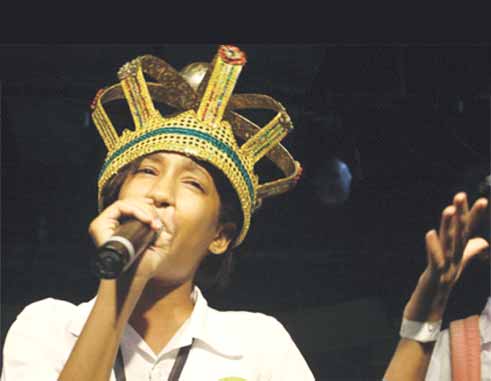 Share this post
ANOTHER year of friendly rivalry was the running theme in Wednesday’s National Schools Calypso competition held at the National Cultural Centre.

Performing the song, “Timing”, Jules had the packed audience singing along to her catch-phrase “hickory, dickory, dock”, as she took on the character of the Grim Reaper stepping out of a large grandfather clock made from cardboard.

Six secondary school students competed in this year’s competition, a far cry from the ten organizers were aiming for. Nevertheless, the competitive spirit was present. Jules won with 434 points, edging out Corinth Secondary School’s Nikile “Lil Nick” Deterville’s “Government Fat” by 22 points. Deterville was aiming for a three-peat this year.

Kyla Sam of Leon Hess Comprehensive Secondary School and Davia “Patatat” Joseph of Choiseul Secondary School tied for third place with 394 points. They performed “Study For CXC” and “Support We Own”, respectively.

In the primary schools category, the competitive spirit was much more visible and audible among the ten competitors. Danzie’s “Cry For Help”, which emphasized the need for teachers to play a key role in students’ lives, won with 398 points. Brandon “Mighty Sizzler” of R.C. Boys’ Primary School came in second with 396 points for his “Kaiso Academy”.

Rounding out the primary schools category were Camille Henry Memorial’s Ziv “J. Jackson” Reynolds whose “Why?” earned him 394 points for third place while Anse la Raye Primary School’s Chorale “Jazzy” Minvielle placed fourth with 368 points for her “Little Children Are People, Too”.

Especially in a season where even veteran calypsonians are seemingly struggling to get their footing, the students proved this week that a succession plan for calypso is definitely in the making.