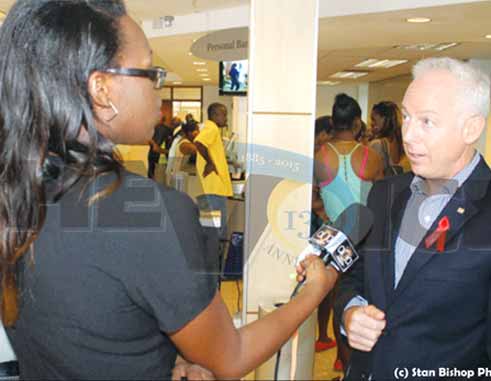 Share this post
SCOTIABANK branches across the island were busier than usual last Friday as they served as hubs for this year’s HIV/AIDS Regional Testing Day.

Scotiabank is a major sponsor of the annual event and Phillip Cross, General Manager and Country Head of Scotiabank (Saint Lucia), said the bank recognizes the significant role it plays in ensuring that people know their status.

“It’s all about allowing individuals who may not know their status to have an opportunity to come in and have safe, free testing to know (their status),” Cross said on Friday at Scotiabank’s William Peter Boulevard branch. “The important part about this is that it aligns with our “Bright Future” philanthropic programme. This is allowing the youth and everyone to have a healthy, safe future.”

Cross said the regional campaign, now in its eighth year, is about health, well-being and breaking the stigma associated with HIV/AIDS. He said it is unhealthy for people to live without knowledge of their status. Families, loved ones and society, he said, are at risk when people do not appreciate the importance of knowing their HIV/AIDS status.

“So this allows individuals to have safe, reliable status checks on their HIV/AIDS status done by professionals,” Cross said. “One way that we can encourage and ensure that we have a bright future for the youth is when we tackle the issue of HIV. The fact that you would know your status allows you to know how you can manage yourself, your loved ones and your health.”

Lorna Wilson is the VCT Coordinator of the National AIDS Programme. She said the collaboration with Scotiabank to provide free rapid HIV testing to the public cannot be underscored enough.

The results of the rapid HIV were given within 15 to 20 minutes. Those who volunteered to have their status checked were also provided with condoms and information on STIs (sexually-transmitted infections), including HIV/AIDS.

Testing began last Thursday at the Castries Health Centre, continuing at Scotiabank’s Vieux Fort, Rodney Bay and William Peter Boulevard branches on Friday and ending at United and Strong’s office at Massade, Gros Islet on Saturday, Wilson said. During the three-day period, she added, the campaign seemed to have fulfilled its objective given the number of people who came in to get tested.

“The response has been extremely good. People are very interested in knowing their status and that’s very good. That’s what we really want as well – that people are responding to our call and our ads,” Wilson said.

According to Senior Medical Officer for Infectious Diseases, Dr. Alisha Eugene, early testing for and treatment of HIV/AIDS increases people’s ability to live longer, allow health-care workers to do adequate contact tracing and limit the spread of HIV. Such testing, she added, also serves to keep newborns free from HIV.

According to statistics provided by Dr. Eugene at last month’s media launch of Regional Testing Day, 1,032 confirmed cases of HIV have been reported in Saint Lucia since 1985. She said that prior to antiretroviral therapy being made available locally in 2006, there were 286 deaths from the disease. Since 2006, however, there have been 68 deaths.