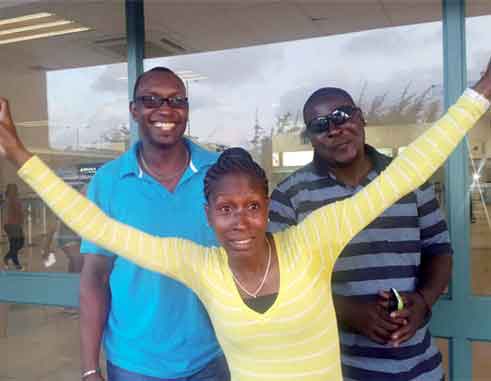 AN excited and very lucky Saint Lucian man left the island Wednesday in the company of his wife en route to London for an all expenses paid experience compliments Heineken.

During the summer of 2014 Heineken embarked on the “Open Your City” promotion, during which time every purchase of a limited edition “city” bottle of Heineken afforded consumers the opportunity to experience a magical moment in one city.

The six Heineken bottles were each emblazoned with the names of cities: New York, Berlin, Rio de Janeiro, Amsterdam, Shanghai and London.

Under the crowns of these bottles were the names of these cities as well, which unlocked the city to various prizes including free Heineken, cash, tablets and smart phones. Additionally, one grand prize was up for grabs: an all expenses paid trip to experience one of these cities. The package included two airline tickets, hotel accommodation, ground transportation, spending money and city tours.

And the end of the promotion, the lucky winner was drawn from a barrel of thousands of names in Gros Islet last year. The entry form belonged to Dwaine Talbert of Bruceville Vieux Fort, who initially was expected to travel to the city of New York.

On Wednesday, Dwaine Talbert and his wife Melissa Talbert accompanied by Gaius Harry, Heineken brand manager, left the island for the city of London where they will enjoy the experience of various cities including Berlin, Amsterdam and London through various tours and visiting historical sites and landmarks.