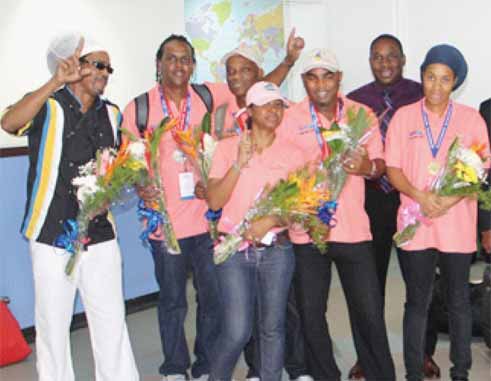 THE ten-member Saint Lucia Culinary Team returned home on Tuesday from Miami where the Taste of the Caribbean Competition was held recently.

Minister for Tourism Lorne Theophilus, Director of Tourism Louis Lewis, Chef Robby Skeete, other tourism officials and the media greeted the members of the award-winning team as they cleared customs at the Hewanorra International Airport.

Despite stiff competition, the team managed to win 2 gold and 5 silver medals in this year’s competition. Other accolades won include Junior Chef of the Year, Overall Cheesecake of the Year Award and a team member being inducted in the competition’s Hall of Fame.

A brief reception and thank-you session was held on Tuesday at Coconut Bay Resort where Theophilus thanked the team for representing Saint Lucia admirably. SLHTA’s CEO, NooraniAzeez, who accompanied the team to Miami, said the team’s performance proves that opportunities for growth do exist within the tourism industry.