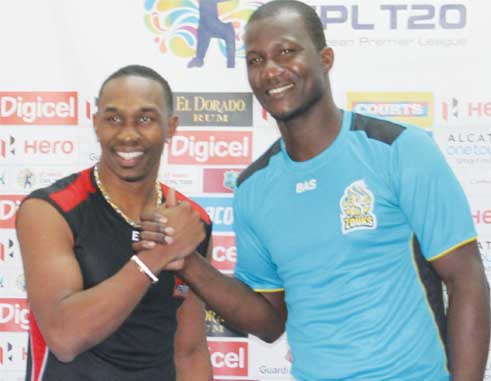 THE Beausejour Cricket Ground will spring into life on tomorrow as thousands of cricket fans from around the Caribbean will converge at that venue to take in the action when the 3rd edition of the Caribbean Premiere League T20 bowls off here from 4.00 p.m. By all indications the opening encounter between Trinidad and Tobago Red Steel and St. Lucia Zouks team should be entertaining.

Speaking at a pre match press conference yesterday, Red Steel captain Dwayne Bravo said, “Both teams are equally balanced this time around and one expects the encounter to be a cracker as the Red Steel will want to continue our winning ways against the Zouks”.

He continued: “We have not lost to the Zouks since the inception of the tournament, and would like to start off with a win on Sunday. The last time we played here we defeated the Zouks by 8 wickets and the real party started after the match up”.

Zouks captain Darren Sammy said: “It is exciting to be part of this CPL group. This year promises to be the biggest party in sport. The calibre of players on the participating teams all have something to prove. As the saying goes everyone is in it to win it. The coaches and captain are quite happy with their respective team selections”.

Sammy said this year, Zouks were quite confident compared to the last two years. We have been hampered by injuries in the past where players could not play the entire tournament. In 2015 we have a good mixture of international and regional players and for me to sit here and say I don’t think we have a chance of winning I will deny that. I have full confidence we will go all the way this time around. Its all about who plays the better cricket on the day and be more consistent throughout the tournament. I am very excited about the prospects”, Sammy said.