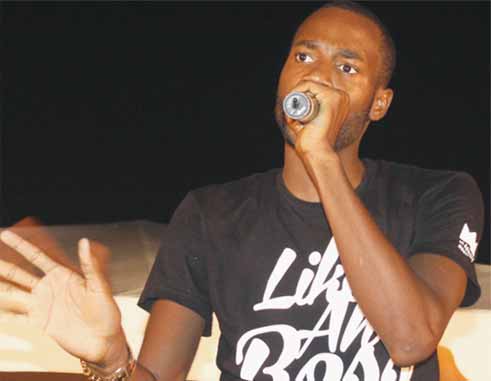 A new burst of musical energy has hit this year’s soca arena in the person of Cephas John alias CJ. Ever since the aspiring soca star hit the Samaans Park stage to headline this year’s official launch of Carnival, his catchy party soca song, “SweffJook” has created a phenomenon among his many fans.

The 24-year old Marchand, Castries resident says he comes from a musical background. His father, Cephas John Sr., is actually a vocalist and CJ grew up watching him perform with musical bands. His father, he said, also went overseas performing on cruise ships.

“I’ve always wanted to perform like him, not necessarily the same genres of music he did but my own styles, which are soca music and dancehall,” CJ tells The VOICE.

CJ says “SweffJook” is actually a dance from Bagatelle, Castries that came about during the last carnival season. The dance, he adds, is based on pointing one’s fingers in the direction one needs to catch their “sweffjook” on another dancer, especially a female.

After seeing and falling in love with the dance, CJ decided to team up with his friend, Shemmy Johannes, to co-write a song to fit the dance. Shemmy gave him the first verse in January this year and the song just took off from there. CJ says he and Shemmy came up with additional lyrics. The intention, he says, was to make the song one that has an international appeal. However, he still remains true to his roots for his current success.

“Had it not been for Bagatelle, there would be no “SweffJook”. So I have to big up the guys at Bagatelle,” CJ says.

CJ has been a playmaker in the entertainment department at Sandals Grande ever since he left school. He says it’s been about six years now since he’s been trying to make his mark through his music, going through different music studios, including Dutch Productions and No Excitement Productions. Earlier this year, he teamed up with Studio 758 and the rest is now musical history in the making.

“I got the link with Thygeson “Penn” Joseph and Irvin “Ace” Loctar when my manager, Tamara Xavier, told them that I had great talent,” CJ says. “They ended up exchanging numbers and I did some voice notes for them. They determined that I did indeed have talent and decided that we do some work together.”

Performing last at this year’s Carnival launch, CJ blew the crowd away with his lyrical flow and captivating stage antics. He admits that he was very nervous at the time because he was fearful of making mistakes during his performance. Nevertheless, he says, his nervousness disappears whenever he hits the stage.

CJ says “SweffJook” is his only party soca offering for this year. However, plans are in the works for more party soca songs next year. He also plans to get into the groovy soca side of things soon. But he has major plans for this Carnival season, he says.

“Right now, I’m aiming at the Party Monarch and Road March titles. I think I’m a strong contender and that I can give the other artistes a run for their money,” CJ says.

The young artiste says he wants to take his music internationally. He says Trinidadian soca star, Machel Montano, is his role model and admits that he’s been following Machel’s musical career for as long as he can recall.

“Actually, I want to be just like Machel Montano or even better than him. I watch his performances, how he comes on stage and his moves,” CJ states.

CJ expressed his gratitude to Penn and Ace and his family for helping him to realize his dream. He also thanks his fans for requesting the song on the radio, making it one of the season’s favourites. He intends to make a career out of music, he says.

“Music is not a seasonal thing for me. In fact, after the carnival season, we should start recording new music by October to at least drop a groovy soca track by December. I’m looking to perform everywhere – not just in Saint Lucia. We’re making music on a different level – not just for Saint Lucia,” CJ says.

Loosely translated “sweff” is creole for “thirsty”. Given the talent, drive and energy CJ is exuding presently, it remains to be seen just how thirsty he is in realizing his dreams.