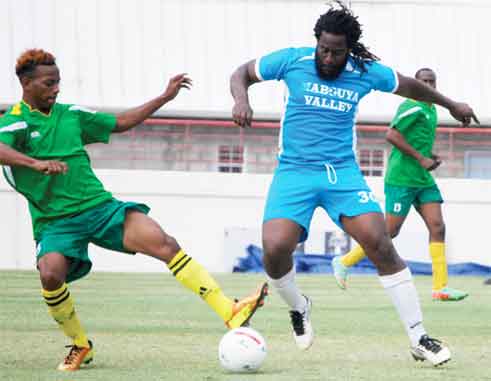 WITH less than 60 hours before St.Lucia plays host to the Windward Islands Football Association Senior Men’s Championship scheduled to commence on Tuesday at the Phillip Marcellin Grounds in Vieux Fort all logistics for the tournament are in place for what is expected to be a thrilling contest amongst the four island.

The atmosphere in the St.Lucia camp is said to be at an all time high as the host nation is set to defend the championship that they won last year in Dominica.

In the opening game of the tournament, Grenada plays St Vincent and the Grenadines from 5.00 p.m., while defending champions St. Lucia take on the Commonwealth of Dominica from 7:30 p.m.

The 2014 senior footballer of the year and defensive mid fielder Sheldon Emmanuel will lead the 20 man squad that also includes nine overseas based players and one local debutant.

The final team selection includes five players from Trinidad and Tobago, four from the Pro League, one each from the USA and England and one from the National Super Football League. The overseas players are Lester Joseph, Jamil Joseph, Tremain Shayne Paul, Shervon St. Prix, Kurt Frederick, ZaccheusPolius. Also in the squad for the first time are Dwight Degazon from the United States of America and MelaniusMullarky out of England.

Head coach Francis Lastic said, “The team is very excited and can’t wait to get to Vieux Fort to defend their title. The return of Sheldon Emmanuel from Martinique has brought a new buzz of energy to the team”.

He continued: “I cannot be quite satisfied with the overall preparation of the team, but have made a few adjustments as most of the players were involved in the Super League representing their various districts, but they have always shown interest and made themselves available for training with the national team. As you know, the national team does not have its own training ground, it’s all about adjusting to the conditions that you meet”.