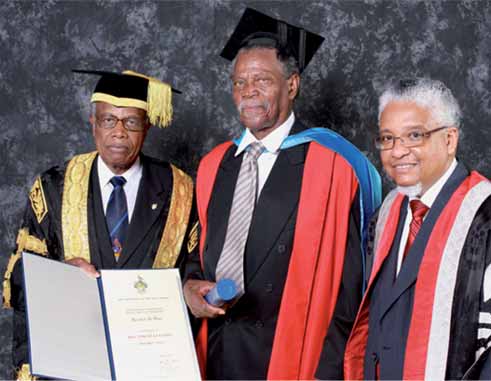 COMMISSIONED to paint exceptional murals, landscapes, pitons and portraits, with many of his major works receiving international recognition, Sir Dunstan St. Omer, died last week in his beloved home country of Saint Lucia at the age of 87.

Sir Dunstan was regarded as Saint Lucia’s leading artist with his major works receiving international recognition. Born in Castries, St Lucia in 1927, Sir Dunstan attended the St Aloysius Roman Catholic Boy’s School and St Mary’s College. He also taught at the former Extra Mural Department of the University of the West Indies from where he received a thirteen-month scholarship to study art in Puerto Rico.

Sir Dunstan, along with social worker, Dr. Peggy Anthrobus, was one of the first Open Campus Honorary Graduates to be so titled at the Campus’ first Graduation Ceremony in Saint Lucia in 2009. He was the featured speaker at the event, at which he lauded the work of The UWI in Saint Lucia and the region. He spoke eloquently about the importance of a regional institution that continuously enriches the lives of Caribbean people, not only in academics, but also in the living arts and sciences, social development, outreach, community building and research.

Sir Dunstan was the artist responsible for designing the national flag of Saint Lucia in 1967. His name is synonymous with art in Saint Lucia. Sir Dunstan received a Doctor of Letters (D Litt) honorary degree in 2009 from The UWI Open Campus. His art also graces an external wall of the University of the West Indies Open Campus Site, where the Prometheus Mural features man receiving from God, the gift of fire and light. This is an apt manifestation of the UWI motto Oriens Ex Occidente Lux (a Light Rising from the West).

Pro Vice-Chancellor and Principal (Ag.) of the Open Campus of The University of the West Indies (UWI), Dr. Luz Longsworth, has expressed sadness at the passing of one of the first honorary graduates and outstanding artists. “ Sir Dunstan was one of those very exceptional artists of Saint Lucia whose arresting work emanated from his home country, transcended the region and burst onto the world.

The UWI Open Campus was very fortunate to have benefited from his iconic artwork mural, Prometheus, which still radiates brightly at our Saint Lucia site at The Morne. Sir Dunstan was a true UWI spirit, the epitome of a Caribbean national, who shone light on and tirelessly contributed to the growth of his country. He has been a great friend and supporter of the University over many years and we will surely miss his gentle and reflective soul.”

Recognised by many as a “living master”, his work is the focus of the Brigham Young University’s David M. Kennedy Centre for International Studies Study Abroad Programme in 2009. He was also the father of the artistic genre known as ‘Prismism,’ which evolved out of his experimentation with the cubist style. Dr. St. Omer also served as editor of the leading newspaper, The Voice of Saint Lucia, from 1959 to 1962.

He has been described as an “Afro-Caribbean classicist” and is regarded as the Caribbean’s leading church muralist. The UK Telegraph also described him as the “Michelangelo of the Caribbean,” as they showered praises on his work in the Cathedral Minor Basilica of the Immaculate Conception in Castries. He is best known for his arresting murals painted on the altars of several churches in Saint Lucia and the St Michael Church in Martinique. Some of the most outstanding murals are the Holy Family Mural at the Church of the Holy Family in Roseau, the La Rose Mural at the St Rose Dilemma Church in Monchy and the Last Supper Mural at the Church of the Holy Cross in Desruisseaux.

He was acclaimed a national cultural hero of Saint Lucia by the Jubilee Trust Fund in collaboration with the Folk Research Centre and the Cultural Development Foundation in 2007. He was the recipient of the national award, the Saint Lucia Cross, and a papal medal from the Roman Catholic Church for his outstanding church murals. In 2010, the Knight Commander of the Order of St Michael and St George (KCMG) was conferred on him in the New Years Honours of Her Majesty Queen Elizabeth II.

The UWI and the Open Campus mourns with the people of Saint Lucia, the loss of this revered cultural hero, Sir Dunstan St. Omer and expresses sincer condolences to his widow, Lady Cynthia and their nine children. May he rest in eternal peace even as his work lives on to inspire new generations in art, academia and media.