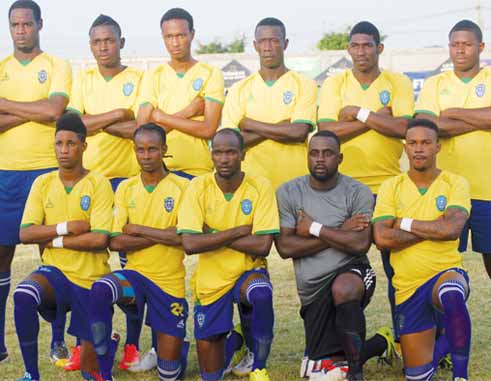 ST. LUCIA fell further out of title contention by losing 2 – 1 to St.Vincent and the Grenadines in the 2015 Windward Islands Football Association Men’s Championship on Thursday evening, dropping to third in the standings and all but surrendering their championship defence.

In a match dubbed the “Battle of the Saints” and a must win for the host nation, No.17 Romiel Felix put St.Lucia ahead by the 38th minute, despite the Vincentians tactical ploy in the defense. Team St. Lucia controlled 65 per cent of ball possession at the Phillip Marcellin Ground and went into the interval leading 1-0.

The resumption, saw St. Vincent pressing on until No.17 Emerald George struck in the 75th minute to level the score 1 – 1. St. Lucia with the local crowd support behind them and showing signs of tiredness on the square allowed St.Vincent and the Grenadines to take full advantage of a number of silly errors by their defense to nose ahead in the 85th minute through No.9 Myron Samuel, a shot that eluded the St. Lucia custodian Randy Poleon through poor judgement.

The defending champions have now fallen short of a comeback and are now five points behind leaders St.Vincent and the Grenadines and three points adrift of Dominica who also have a crucial game in hand against leaders St.Vincent.

In the opening game on day 2, No. 7 Julian Wade and No.8 Glenworth Elizee were the heroes for Dominica as they gave their team its first victory and a chance of lifting the championship as well.

Like the previous game the Dominicans were down 1 – 0 within the first 15 minutes of the encounter. Grenada’s No. 5 CassimLangaigne was the scorer, but four minutes later No. 7 Julian Wade restored some pride and joy for “the nature boys” and that’s how it remained up until the half time whistle. The resumption saw similar exchanges coming from both teams, but it would be Dominica to nose ahead through No. 8 Glenworth Elizee and seal the deal with 10 minutes remaining on the clock of Referee Vivian Robinson from St. Lucia.