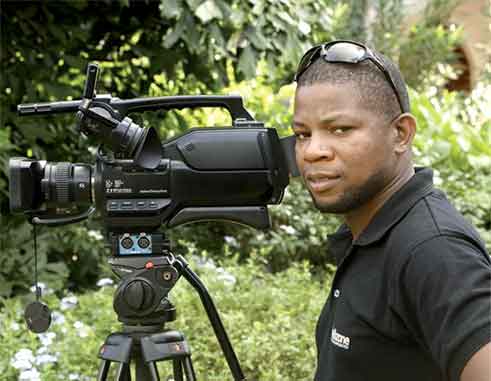 TODAY’s Face In The Crowd is one that got me by surprise because up until this year’s Jazz and Arts Festival, I never realised how much kudos he really deserved.

Sharefil Gaillard is a former colleague of mine. The 32 year old cameraman for MediaZone Ltd/Choice TV started with the company as a lowly messenger but quickly climbed the ladder of improvement. He has been on his fair share of roller coasters in life as well growing up between two ghettos, Marchand and Conway. However, this is not his story today…his story is one of sheer perseverance and achieving your goals once you set your mind to them.

To many, Gaillard comes across and sometimes brash and cocky. He is also known for being a serial jokester and prankster but underneath it all, he is extremely family oriented and for a want of better words, a “big Ole Softy” hence the reason why my relationship with him always ends up on great terms. It was on Jazz Saturday at Pigeon Island that I caught myself staring at Gaillard on main stage filming the big stars and I was saying to myself; “Yeah Man…Wayne (Whitfield, CEO of MediaZone) finally put you on the stage”.

I then thought, wait a minute, this is huge for Sharefil because the Whitfield never puts just “anybody” on the stage…he must have either conned the CEO into putting him there or he has really stepped up his game”

Of course, I was only joking about the conning part. At that moment, I had a flashback of Gaillard, another former colleague of ours and myself driving around in search of the next big story when he said with a grin; “I have to learn how to use these cameras. I can’t just be driving around like this…you all will need me in the field and gassa, the boss man go pay me more, you check it?!”

Following that proclamation, I saw him really go after that goal. I observed him studying the cameras in his own time and shadowing the other cameramen when they went out on shoots. He would come in on weekends just to study the craft of videography until he slowly but surely began going on more shoots.

Before I tell Gaillard’s story all on my own, I will move over to the interview so that you could hear it in his own words.

The VOICE: Early on in your life, you grew up in the “rough” parts of Castries; what was life like for you then?

Sharefil: It was normal. There were little children running around, playing and doing all the normal kid stuff but on the other hand, I was introduced to the violence and criminal lifestyle from an early age but I never let that affect me or keep me down. I never used it as an excuse to…not do anything with my life. In fact, my circumstances gave me a hunger thrive and do better you know?To move on and up.

The VOICE: How long have you been working with MediaZone?

Sharefil: I’ve been there for about five years now.

The VOICE: When you started, what was your job title?

Sharefil: I started off as a driver. I was also the receptionist for some time.

The VOICE: At what point did you decide that you wanted to be more than just a driver/messenger?

Sharefil: I always enjoyed the arts whether it be photography or videography. From previous employment, I knew how to operate cameras for photography but the video camera was my new found love. I always knew that I wanted to pursue that craft and it became a hobby, no a passion and I wanted it to become a career so it was a decision that I’d made a long time ago, even before MediaZone.

The VOICE: Talk me through what it took for you to be where you are now.

Sharefil: I already knew the basics because I took some classes for the specific skill in my own time. I knew a professional video editor who would give me tutorials and help when I needed. I started looking up videos and tutorials on youtube and I went around asking other professionals for help, you know, how to go about doing certain things. The owner of Choice even helped me with ideas.

The VOICE: Tell me about your first time filming officially for the news

Sharefil: One evening, it was a Sunday night, there was a homicide in town and we had no cameramen so I just took the camera, rushed onto the scene, took footage and brought it back. I already knew how to use the camera by then.

The VOICE: You were at the scene of a homicide for your first solo shoot? What was that like?

Sharefil: I was very nervous because that was my first time filming for the news. I mean, I’ve seen that sort of violence already when I was growing up but documenting it as a job, I really didn’t know what to expect but I did the best that I could and everything worked out.

The VOICE: I specifically remember seeing you working hard to better yourself, going above and beyond the call of duty all in the name of progress, what message do think this sends to your colleagues and to management as well?

Sharefil: I don’t know how to answer that question because I never did it for them, I did it for myself. I was never afraid to ask questions as to how to go about doing things…if I don’t know, I ask. I wouldn’t pretend to know everything and I was never ashamed to ask for assistance. Personally for me, it was a huge step moving forward because I know what I went through to better myself and I’m still actually in the process of bettering myself.

The VOICE: How does it feel knowing that you are trusted enough with the responsibility of going out on your own to film and even better, to film on the big stages like the Jazz Festival?

Sharefil: It feels good knowing that you are trusted enough to perform a task and seeing that you tried to do it to the best of your ability. Somebody once told me that you could be great at what you do but you have to be humble, and considering all of my struggles in life, I try to live by that saying.

The VOICE: What’s next for you because after all, the sky is the limit right?

Sharefil: I can’t answer that yet because this job has opened many windows of opportunity be it local or foreign but I just love what I do and right now. I’m just continuing to try everyday to improve on my skills and let my work speak for itself.