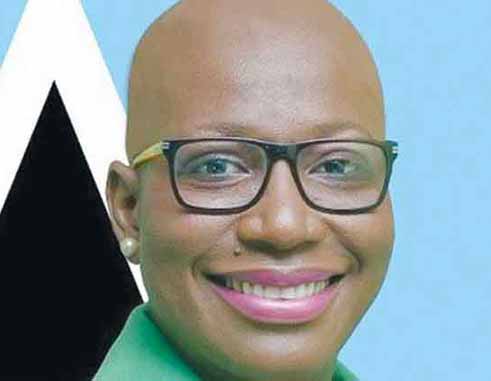 Calls Him ‘Enemy of The People’.

Prime Minister Dr. Kenny Anthony on Tuesday raised the possibility of St Lucia recording economic growth this year, for the first time in three years, while delivering his budget statement in the House of Assembly.

But the promise earned the Prime Minister scathing rebuke from the Leader of the Opposition Gale Rigobert who flatly criticized his performance as Minister of Finance labelling him “the worst economic manager” in the region and “an enemy of the people of Saint Lucia.”

Replying to the budget statement in the House of Assembly during the first day of the two-day debate Thursday, Rigobert questioned Anthony’s credibility, noting that in his statement last Tuesday he was again raising expectations that the Saint Lucian economy “may” return to positive growth in 2015.

It was the first time Saint Lucians had heard Rigobert use such strong language anywhere, and her performance caught many people completely off-guard. The former University of the West Indies lecturer did not hold back as she flayed Prime Minisrter Anthony’s handling of the St Lucia economy, especially for presiding over three successive years of economic decline.

She declared: “I am calling this Minister of Finance, an enemy of the people of St Lucia because any Minister of Finance who presides over three consecutive years of economic recession and contraction, has demonstrated the incompetence of his economic management and his unsuitability to hold that position. He can only be considered as an enemy of the economic interests of the people of St Lucia.”

Quoting from the “2014 Caribbean Economic Review and Outlook for 2015”, published by the Barbados-based Caribbean Development Bank (CDB), Rigobert said a review of this document led to “the inescapable conclusion that this Minister of Finance, is the worst economic manager in the CDB member countries as no other Minister of Finance has presided over there consecutive years of economic contraction and negative growth….”

To compound matters, she said, Anthony had overseen policies that had resulted in by far the worst situation with regard to unemployment among CDB member countries. “The unemployment rate in St Lucia for 2014 as reported by the CDB is 25.8 percent, the next worst performance is in the Bahamas where the recorded rate is bad, but much less fortunate 14.3 percent.

Questioning the Prime Minister’s credibility, the Opposition Leader pointed to the fact that while he had raised the prospect of a return to positive growth, he had admitted that with the exception of tourism, the other three sectors that might be expected to contribute to the economic turnaround—construction, manufacturing and agriculture—had all recorded declines during 2014.

She said that for growth to take place in the economy, there had to be a plan. She had waited to hear Anthony’s plan to restore the economy to positive growth, “but again, I waited in vain.”

Anthony, she concluded, had “no plan…no strategy and no vision”.