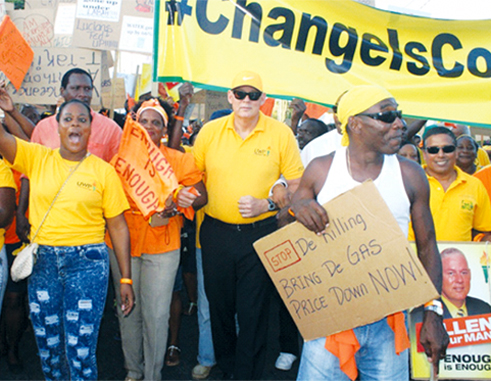 MONEY matters. It does even more to those without and who are trying to get their hands on it.

Money is also a ruthless task master which loves its own company. It is also an elusive and reluctant servant which flies away when poorly treated.

These truths should help explain the economic predicament of Saint Lucia and the present scarcity of money. Those who were promised better days ought to note that ‘Days’ has quite suddenly been dropped from farce. Everything here now works in reverse. Transparency now operates in the dark. Hidden secretiveness is now an oxymoron for openness. Worst, integrity has been kicked out the room and vagabonds habituate where persons of vision and integrity once conducted the affairs of State.

Money or lack of it and its misuse, remains at the centre of everything that is wrong with Saint Lucia. Witness the following: 1. Government has announced the construction of offices for the Prime Minister for some $40 million (EC) at the same time it is handing over the management of its only international airport to a foreign outfit. Is this another example of secretive deals in the dark? The question is crucial because the government continues to tout ‘tourism’ as the island’s new economic saviour even as they try hardest to steal tourism from Allen Chastanet, a former Minister of Tourism under Sir John Compton.

2. The unconscionable increases in vehicle licenses perhaps to make up for lost income from the foregone threatened five percent pay deduction in the salaries of Mary Isaac and her civil servants. Of course, the lost revenue from siphoning off in broad daylight (with equally guilty accomplices looking on) of excessive gasolene prices plus a three-month review. Thank God Allen Chastanet and his orange protests stopped the dissemblers and the lovers of other peoples’ money in their tracks.

In the meantime what relief is there for workers who have borne the heat of the day and are now in declining years praying and hoping for some relief from government? The language which uncaring politicians understand is the language of action. It’s now past high time the UWP takes to the road with weekly public meetings, taking their message (and the fight) to Labour and anyone else who stands in its way. Allen Chastanet must now prove that he is ready and willing to re-ignite the orange protest and turn it into a call for the government to return Hewanorra to SLASPA and to have that airport modernized with help from friendly governments and with money which the reckless Labour Government proposes to spend on offices for a prime minister who is afraid to venture into Castries.

By the way did Prime Minister Kenny Anthony ever visit the families at the back of the Castries Health Centre during the recent loss of lives there? Is he afraid of the people of Castries? Why is he hiding and staying away from the people?