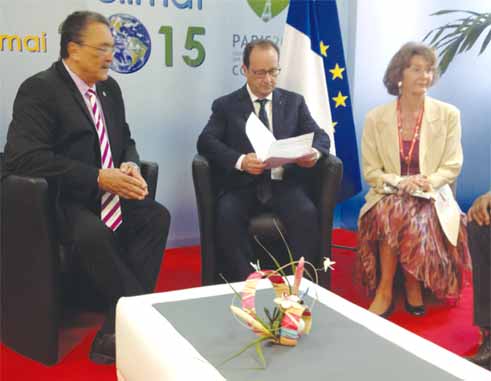 The meeting was called to prepare and mobilize the Caribbean for the 21st Conference of Parties (CoP) of the United Nations Framework Convention on Climate Change, to take place in Paris in December.

The Martinique meeting was chaired by President Hollande, who pledged France’s support for Caribbean initiatives ahead of the Paris meeting.

Before the conference started, Prime Minister Anthony held a bilateral meeting with the French President, during which the two exchanged on issues of mutual concern to Saint Lucia and France.

Prime Minister Anthony also discussed with President Hollande his concerns about cooperation in cross-border crime between Saint Lucia and Martinique.

President Hollande said he was interested in deepening cooperation between the Caribbean nations and France’s Caribbean territories, ahead of the Paris meeting.

He also noted France’s concerns about the vulnerability of the Caribbean to sea level rise and other negative Climate Change effects that place the region at risk.

Dr Anthony said Martinique’s membership of the OECS, and France’s increased role in the region, opened the way for greater levels of cooperation between France’s Caribbean territories and their Caribbean neighbours.

Following his meeting with the French President, Prime Minister Anthony and his delegation attended the Caribbean Climate Change Summit in the Martinique capital Fort De France.

Dr Anthony, who has lead responsibility for Climate Change and Sustainable development in CARICOM, addressed the summit on several issues relating to the Caribbean’s vulnerability to Climate Change and effects of natural disasters.