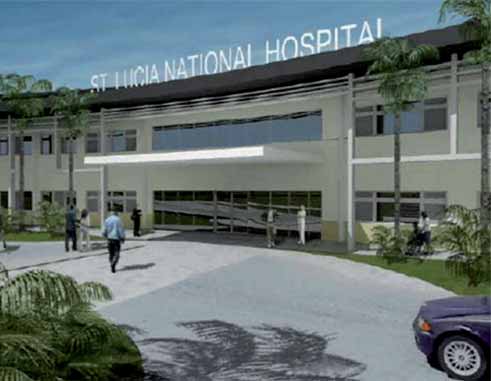 TWO new hospitals will be in operation within the next 12 months, and along withother initiatives undertaken in the health sector, they will transform health care in the country to world class standards.

That is the view of Governor General Dame Pearlette Louisy as espoused in her Throne Speech Tuesday at the joint sitting of parliament.

The hospitals, costing over EC$270 million, are expected to be operable early next year, at the latest.

They are the Dr. Owen King-EU Hospital, located at Millennium Heights and the new St. Jude Hospital at Cantonment, Vieux Fort.

Both hospitals, said to be world class facilities, had been under construction for several years, six years in the case of St. Jude’s.

The Owen King-EU Hospital, though no longer under construction, is still not ready to open its doors to the public. Government, with assistance from the European Union (EU) is now up-skilling and training staff while installing specialized equipment prior to commissioning. It is the hospital that will replace Victoria Hospital. It is projected to be operational later this year.

Dame Pearlette said that the Millennium Heights Medical Complex Act has already been enacted. This, she said, provides for the management of the facility, which is similar to what obtains for St. Jude’s.

“My government is hopeful that St Jude Hospital will be ready for commissioning in early 2016. In this regard, we are grateful for the bilateral support provided by a number of countries, particularly the Republic of China (Taiwan), but also, most recently, the Government of Mexico,” Dame Pearlette said.

She said that by entrusting the management of public hospitals to Boards, a decision government made not too long ago, there will be improvements in the quality of health care at the various medical institutions in the country.

But she issued a warning to the various Boards stating that the government cannot be expected to pour millions of dollars into health institutions without accountability of expenditure and governance, or assessment of the quality of care offered by them.

“My government has therefore decided to establish an independent Quality Care Commission to regulate, inspect and rate the quality of service offered by all of our hospitals, both public and private,” Dame Pearlette said, adding that this model had been successfully tried in the United Kingdom.

“We hope to adapt that model to our circumstances. The Commission will undertake periodic reviews of our hospitals and health institutions and will assess the delivery of health care services by answering the following seven key questions, the first five of which are identical to that asked in the United Kingdom,” she said.

The seven questions to be asked: Are they (health institutions) safe? Are they effective? Are they caring?

Are they responsive to people’s needs? Are they well-led? Are they making the best use of the subventions made available to them by the State and are they faithful to the Acts that authorised their existence?

The last two questions, according to the Governor General, will apply only to public hospitals.

The government is now looking at ways in which it could derive income from the new medical infrastructure it has put in place. They have identified the opportunity to establish Saint Lucia as a preferred location for medical research and education.

“In this regard my government is presently engaged with Clifford Chance, a world renowned legal firm, to study the legislative and regulatory framework needed to transform Saint Lucia into a world class medical research centre,” Dame Pearlette said.
Clifford Chance, she said, has been commissioned to draft the legislation for consideration by parliament during the current parliamentary year.