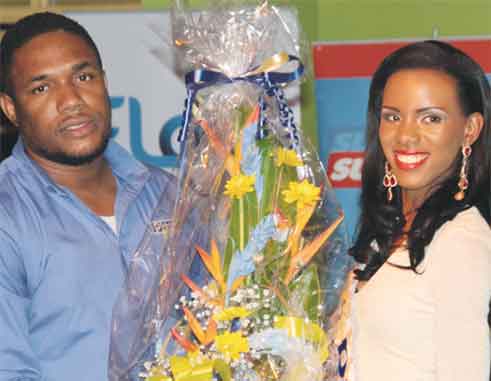 PITON Beer continues its support of Saint Lucia Carnival 2015 with its selection of the Piton representative for the National Carnival Queen Pageant 2015. Twenty twoyear old Anya Edwin, a resident of Marchand, will be one of the eight contestants who will compete for the coveted title on July 4.

In making this selection, Brand Manager, RohanLovence carefully considered the main characteristics of the brand and found that Miss Edwin’s personality was in keeping with what the beer stood for.

“She is fun-loving, engaging and sociable – all the features which make Piton Beer truly Saint Lucian. Her calm and poise stood out, and it was an easy decision for us to select her as our Carnival Ambassador. We are very excited about our connection to Miss Edwin and are confident that she will represent the brand proudly and successfully. To us, she is a Saint Lucian gem and already a winner.”

Miss Edwin is currently pursuing a Bachelor’s degree in Business Management at Monroe College and was gushing with excitement after the official sashing ceremony. She said: “I am overjoyed to be selected as Miss Piton for this year’s Carnival Queen Pageant. I will display the same level of excellence that Piton has achieved over the years and it is a privilege to be representing such a classy brand and most importantly, a local brand. ”

She is also the Secretary of the National Volunteer Coordinating Unit within the Office of the Prime Minister and a performing arts enthusiast enrolled with the Silver Shadow Performing Arts Academy.

This sponsorship is only part of Piton Beer’s support of Saint Lucia Carnival 2015. As in previous years, Piton has aligned itself to many of the carnival bands and the events on the national carnival calendar and will host its own VIP section in R3D Unlimited. Piton has also been one of the main sponsors of the National Carnival Queen Pageant with the sponsorship of a number of contestants over the years. In 2012, the brand threw its support behind SherwinnerEleuthere, and Jamara Smith and Nathalie Girard in 2013 and 2014, respectively.