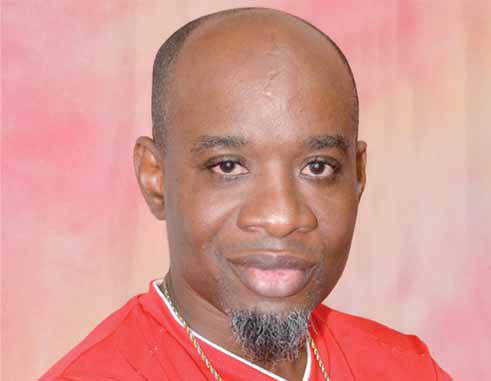 WHAT would go through your mind if you fell ill, you knew you were ill yet the numerous health “professionals” treated you like a hypochondriac?

Imagine feeling your body deteriorating and whenever you seek the help that you desperately need, you get labelled as insane and get locked away in a mental asylum…doesn’t that sound like the script of a thriller style film or TV series?

Well for 39 year old Trade Economist Mervin Bertin, that was his reality for a little over four years.

The Ciceron resident has been living with the debilitating disease Multiple Sclerosis (MS) for nearly 10 years. However, he was only given the correct diagnosis two and a half years ago…for four years prior to his diagnosis, Bertin would be locked up at the Mental Wellness Institute on numerous occasions , simply because he knew something was wrong with him but no one could tell him what it was.

The VOICE: Tell me about your journey up till your diagnosis of MS

Bertin: My journey or struggle or battle of understanding or finding out about myself and MS…I can remember that close to eight years ago, I had some serious balance issues and fainting spells. I researched and was told that I had to do an MRI (Magnetic Resonance Imaging) from which nothing was found and there was no diagnosis, but about five years ago, I had a serious MS relapse where I had some serious stroke like symptoms…sight, speech, my speech was sluggish, my mobility was…I couldn’t run or jump. Even my writing, my signature was haywire and I couldn’t understand what was happening. But thank God for Doctor Segun Tobias who pushed on and looked into my symptoms and he did a spinal tap which is one of the first ways of diagnosing MS. It was then that proteins were found in my spinal fluid. I was advised to visit Martinique where I did a brain MRI and certain lesions were found on the scan and I was diagnosed officially with MS nearly three years ago. I had another relapse and went back to Dr. Tobias and he prescribed treatment which I’m currently on.

The VOICE: What is MS?

Bertin: Multiple Sclerosis is where the central nervous system is being attacked by the antibodies. This deteriorates the axons in the body and there is a breakdown in transmission. This leads to a number of issues including those with your sight. Sight is one of the most common issues along with balance. Your mobility could go, your speech and your body could just shut down. If you do not have proper signals flowing through the nerves then your body could breakdown and if you don’t understand what is happening to your body then you have an issue. But since we do not have the proper systems in place here, persons are diagnosed very late with MS.

Getting an MRI is very important because that’s where you could see a detailed image of what’s going on in the body, especially the brain. We have a lot of brain issues that have gone without being properly diagnosed because of lack of MRI treatment. I’ve heard that there are two MRI machines being installed at the two new hospitals and I can only hope that they will be available at a palatable cost because from my experience, it is extremely costly doing an MRI in St Lucia compared to Martinique.. We need to have some serious governmental intervention as it relates to the availability of these resources, making it palatable for St. Lucians to be able to afford and get the service out there for the general public.

The VOICE: What is the worse case scenario for a sufferer of MS?

Bertin: You can become a vegetable. You would not have any control of your limbs or your motor skills. For myself, it’s about me embracing myself and being comfortable right now. I’m happy to be in the know now. I have been diagnosed with a disease that is not so critical and is not a death sentence. It’s a whole personality reformation…it’s you and MS.

The VOICE: Before your diagnosis, you were put through the wringer. Tell me about that time in your life.

Bertin: In the last four years, I’ve had what I’d call the misdiagnosis of mental illness which has led to me being at the Wellness Centre six times. I wouldn’t say that I didn’t have moments of depression and outbursts. In the first instance I’d say that it warranted some serious intervention but after being there, no thorough assessment, no psycho assessment and no psycho evaluation was done. I don’t believe that I sat with any of the doctors or the trade professionals to find out my issue. I kept on going there and they’d just put me in a suit, lock me up and proclaim that I’m troublesome, I’m giving trouble. I would not sleep. But how can somebody who has a ceiling fan in his room, four pillows on a bed all alone, sleeping on a simple mattress in a hot environment…heat and MS don’t go together. A number of times I’d try to explain to them…even after being diagnosed with MS that I’m not mentally ill, that I’m diagnosed with MS and I shouldn’t be taking this medication. I’d ask them if they knew about MS and seemingly nobody knew, not one of the nurses. And not once could I remember sitting with one of the doctors to give me an assessment. They would just come, peep at you and one of the nurses would write a report and from that, they’d give you treatment. They’d tell me that I’m giving trouble for not taking the medication but why would I?

The VOICE: During each stint at the Wellness Centre, how long would you be kept there?

Bertin: Minimum, one week…maximum, one month

The VOICE: How many different doctors did you see before Dr. Tobias?

Bertin: I can’t remember but there were a few.

The VOICE: After your ordeal what is your opinion on the island’s health system in terms of diagnosis and patient care?

Bertin: I believe that they have a “one size fits all” mentality. Not all that looks like a horse is a horse. A zebra looks like a horse but it’s not one. In my stint at the Medical and Dental Council, one of the things that were implemented for re-registration was continual medical education and a lot of doctors objected to this because they would question where they would get it from etc. but some of them didn’t want to. If you’re not continually educating yourself as per different developments in the medical profession, there will be a continuity of misdiagnoses on island and I believe that, that was one of the best moves that the Medical and Dental Council could have made. In St. Lucia, we need to develop. Although technology and everything is developing around us we’re not developing with the times.

The VOICE: Have you considered taking any legal action against the persons who ill-treated you?

Bertin: Personally, getting to the root of this would be a mammoth task and I don’t think I have the energy to go that way. All I want to do is to educate the public that this illness, Multiple Sclerosis exists and what may look like a stroke is not a stroke. We have people embracing the hocus pocus/voodoo kind of thing but people…medically, we need to research our illnesses and find out with the help of doctors, a proper explanation. The doctors can help us out a lot with our issues but we need to embrace medicine.

The VOICE: What would you like to see happen for MS sufferers in St. Lucia to help you all along?

Bertin: There are other persons here who may have been diagnosed with MS and from my research, I’ve learnt that there are societies out there who help those persons with funding because treatment for MS is very costly. My doctor told me that this is a “white persons illness” because it predominantly affects the Caucasian population and since I have the genes in my bloodline through my father, I’m guessing that it could be hereditary as I strongly believe that he has it too…all he’s missing to confirm that is a brain MRI. MS is something that we need to rally around and find the systems and mechanisms to help persons. Because of what I’ve gone through, I’ve not been able to secure a job for four years but I thank God for his mercies.