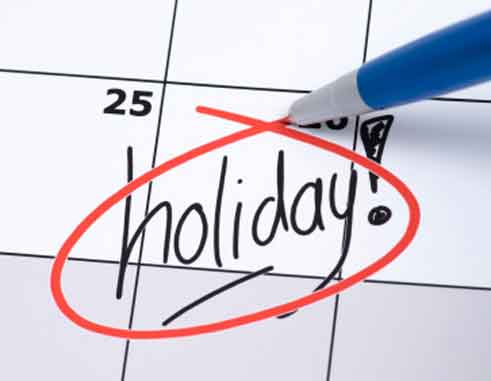 I have long suspected that we (Saint Lucians) like holidays more than everyone else in the whole wide and wild world. We will celebrate any and every holiday, regardless of its significance to us. We don’t care what it’s for, once we get a day off to decide whether to stay in or go out. Some we observe and celebrate without even knowing how it came about. And even in cases where we have no reason at all to celebrate – like December 13 – we will still hold on to the holiday, just because it’s a free day away from work!

Few of us know – or care – that we have both Holy Days and Holidays – or that the two aren’t all mutually exclusive. The Holy Days we observe – whether as Holidays or not – were extracted from our Christian bibles and calendars. The (non-Christian) holidays (like February 22 and August 1), we created largely according to geography, culture and history.

Last week, I had reason to reflect on the issue of ‘holidays and holy days’ – and how we stand out among nations in the way we observe and/or celebrate holidays.

Monday, May 25 was a holiday. The Christian calendars we get for Christmas say it was ‘Whit Monday.’ But the day before (Sunday), I was telling a friend I was heading home to prepare for the Monday version of my daily radio program (‘earl@large’ on WVENT 93.5fm and 94.7fm) when he asked me, “You working on holidays too?”

I didn’t really remember this year’s ‘Whit Monday’ holiday thing, so I was completely caught off guard. He laughed at my lapse and we started a discussion about ‘What is Whit Monday?” and ‘Why is it a holiday here?’

I started by asking him: “What you know about Whit Monday?”

Wrongfully assuming the word ‘Whit’ in Whit Monday was ‘Wheat’, he told me: “It probably has to do with some time when we used to grow wheat here and maybe they used to harvest it on a Monday in May?”

I told him straight off: “I didn’t think so!” and pointed out the difference in spelling for what he thought was the same word. I invited him to “Try again.”

This time, he said “It probably is a Monday put aside in May to celebrate people like comedians who use their wit to make people laugh and feel good.” I assured him, once again, that he was “Dead wrong” because “There’s no wit in Whit Monday.”

On my way home, I asked a few others the same questions — and most replied: “I don’t know…” and/or “I don’t care…” and still others saying, ‘I couldn’t care less, once is a free holiday.”

A few persons my age (and older) said all they can remember is that it had something to do with “The Anglican Bazaar” – when (way back in time) we used to go play and spend, have a nice time eating and drinking local foods and juices, playing games, buying raffle tickets, eating ice cream and ice cream blocks, chewing tablet, ‘gegesh’, sucking local plums and biting hot local peanuts. It was like everything “came in season” for the Anglican Bazaar. (I went to Trinity Church Road to see if it was on for this year, but there was no sign…)

When I got home I decided to dig it up. However, try as I might, I couldn’t get anything about ‘Whit Monday’ in any of my dictionaries or almanacs.

Instead, I got ‘Whit Sunday’, which is ‘the 7th Sunday after Easter’. I also got ‘Whitsuntide’ – described as “the week after Whit Sunday, including the Sunday.” In which case, if we’re to believe it that way, then Monday was ‘Whitsuntide Monday’ (and not ‘Whit’ Monday) .

It will also mean that because ‘Whit Sunday’ is always a holy holiday that will always fall on a Sunday, the Monday after what should be called ‘Whitsuntide Sunday’ automatically becomes what we call ‘Whit Monday’ – to get our additional extra day of holiday for it having coincided with a holy Sunday.

But while I had no choice but to work from home Monday during the holy holiday, I was in fact observing another day that verily means much to me.

May 25 is observed internationally every year as “African Liberation Day” – the anniversary date when Ghana became the first African British colony to become independent, the anniversary date too of the launching of the Organization of African unity (OAU), now renamed the African Union (AU).

Back in time, African Liberation Day was a date when people all over the world paid tribute to those nations that had been liberated — whether peacefully or through wars of liberation — and to offer solidarity and support to those still struggling or fighting for their liberation.

Today, most African countries are free from the colonial yoke, the African Union is a thriving entity representing a new Africa that’s better able to access and use its mineral resources and more in control of its destiny.

African Liberation Day today is more observed as Africa Day, when all attention shifts to the continent and the issues that still bind people of African descent the world over to Africa.

In our case, CARICOM is leading the world movement for Reparations from Europe for Slavery and Native Genocide. From the African Union to the US Congressional Black Caucus to the growing Reparations Movement in Britain and Europe, all have adopted CARICOM’s approach as a blueprint for construction of what is already shaping up to be a global movement that’s very much alive across the English and French-speaking Caribbean and taking shape everywhere else where African descendants live on this planet.

So, on that Monday, while most of you celebrated a holy day without caring to even know why it was holy, I was quietly (but purposefully) observing what is also a most noteworthy holiday that people of African descent (the world over) really need to know more about.