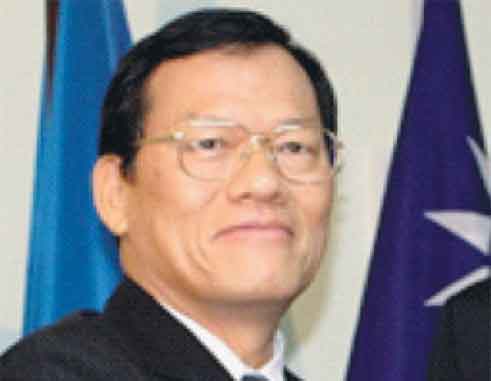 THE Republic of China on Taiwan continues to pour money into the government’s coffers.

The latest cheque for more than $8 million was presented to the government of St Lucia yesterday.

It was the first presentation by Taiwan for the new financial year, just started.

The Government of Saint Lucia received a cheque of EC$8,173,053.01 to finance the Constituency Development Programme (CDP), while EC$220, 118.20 was received for the establishment of a Block Making Facility at the Bordelais Correctional Facility.

James Chang, Ambassador of the Republic of China (Taiwan) to Saint Lucia, said he was pleased that his government could continue to partner with the Government of Saint Lucia, to undertake meaningful projects around the island.

He said: “Better roads for both vehicles and pedestrians mean more safety and a higher production of work. For instance, parents will be able to send their children to school with peace of mind and farmers will be able to transport their produce to the markets at ease. Courts, fields and the like are not only important for children to play but also to develop a sporting career. Beach amenities are quite important since tourism is an important economic contributor to Saint Lucia and the beach is one of the leading tourist attractions.”

Prime Minister.Dr. Kenny D. Anthony expressed gratitude to the Government and people of Taiwan and highlighted the importance of the CDP. Said the Prime Minister: “The CDP represents construction jobs in all parts of the country; in every constituency, in nearly every community, village, town or hamlet.

“The CDP translates to major improvements in the quality of life of thousands of Saint Lucians through improved access, improved drainage and better community amenities.

“The CDP effectively means that all MPs have the opportunity to directly impact what happens in their respective constituency.”

Said the Prime Minister: “Between 2012 and 2014, Government has spent in the vicinity of 46.9 million Eastern Caribbean dollars in the CDP. By the end of this financial year, we would have spent over 70 million and this government is proud to say that all these monies can be accounted for. They can be accounted for in the Treasury and the work can be seen tangibly all across Saint Lucia.

“Last year alone, 556 contracts were issued, resulting in the creation of over 3,000 short-term construction jobs.

“I am pleased that this $8.1 million will soon be injected into the economy this quarter, and I am sure, to the delight of communities around the island.”

Dr. Anthony also thanked Ambassador James Chang for Taiwan’s contribution to the Block Making Facility at the Bordelais Correctional Facility. The sum received will go towards the purchase of a block making machine to facilitate the manufacturing of concrete blocks. Once operational, this will assist Bordelais in the building of a perimeter wall in the short term and will provide an avenue for income for the inmates.