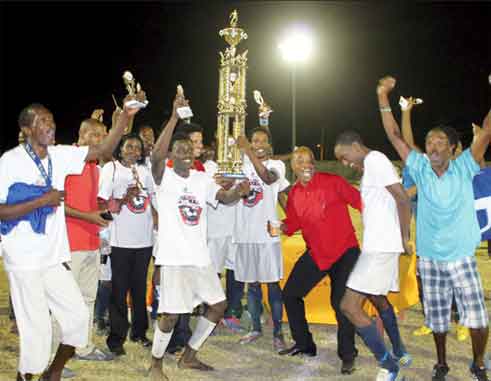 IT can best be described as a massive man made eruption that turned into a scene of celebration on Sunday evening at the Phillip Marcellin Grounds in Vieux Fort. Prolific striker Troy Greenidge’s 74th minute goal, his ninth in the tournament saw Gros Islet crowned inaugural St. Lucia Football Association sponsored Vizions Entertainment/Michel’s Electrical Super League Football Champions emulating their under – 23 team that recently won the inter – district competition at the same venue.

With a crowd of well over 1200 football fans, the final was dubbed a North / South derby between long time arch rivals Gros Islet and Vieux Fort South. The scores were locked goalless at the halftime whistle despite a number of scoring opportunities to the dismay of the many fans in attendance.

On the resumption following the break, both teams stepped up the pace a few notches with only standing room now available, and with every chance of a scoring opportunity missed, one could have heard the loud shouts in the distance as the fans from both sides continued cheering on their respective teams for that one goal.

Finally the deadlock was broken and it would be the fans from the north including parliamentary representative Emma Hippolyte who would be chanting their long time song anthem “Jean Gros Islet” when Greenidge collected a free ball to slot home the much deserved winner in the 74th minute of the encounter. The chanting never stopped as Vieux Fort South was determined to equalize and on three occasions in quick succession before regulation time Gros Islet custodian Randy Poleon came up big with three epic saves for his team to secure the victory and take home the EC$20,000.00 at stake along with the championship trophy.

A jubilant Gros Islet captain John Perry Joseph said; “It was tough, it wasn’t easy, We came out as a unit and we got the job done. Vieux Fort was coming at us; they gave us no time to settle down and with crowd support behind them they made life difficult. But during the break we discussed what transpired in the first half and took it from there. When Troy broke the deadlock, my emotions went high. All I mentioned to my defense was, let’s keep it together and hold it for the guys playing up front, with less than 15 minutes left on the clock”.

An elated Anthony Evans, manager for the Gros Islet team following the victory said, “We had a few scoring opportunities in the first half and like anything else we squandered them. During the half time break I told the players that we could leave the north of the island, travel to Vieux Fort in the south and head back home empty handed. We needed to pull all stops. We restrategized, made the necessary changes and adjustments and it paid off ”.

He continued: “Thanks to Troy Greenidge again for coming to our rescue scoring his 9th goal in the tournament and our goalkeeper Randy Poleon in the dying moments of the encounter with three spectacular saves. I saw Randy in goal for St. Lucia during the Windward Islands men’s tournament recently and was kind of worried about his performance then. To me he was a shadow of himself, but tonight he stood his ground for his team”.

Evans noted: “It was an overall team performance. All the players who represented Gros Islet gave it their all and the entire technical staff is satisfied with the performance. We salute our players”.

Before the final showpiece for the third place silverware, Soufriere defeated Canaries 1 – 0, the goal scorer No.12 Nixon David in the 8th minute of play.

Vizions Entertainment Boss Edward Fedee said after the encounter: “We got the crowds in; we are really encouraged and pleased by the response, but most importantly we started our games on time, we had a great atmosphere. Come 2016 we will increase the prize money to a whopping EC$60,000.00. Thanks to our sponsors, the teams, and of course the great supporters of football from the 19 SLFA district teams”.