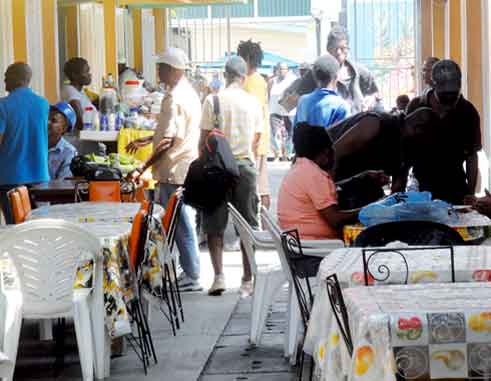 Guidelines and legislation governing one of the fastest growing businesses in Saint Lucia are now under revision with the hope that the country will be in a better position to minimize or eliminate certain illnesses.

The laws referred to deal with food safety in Saint Lucia, which is presently overwhelmed with establishments selling cooked and prepared food for both citizens and visitors.

Those structures that sell cooked or prepared food range from swanky hotels and restaurants boasting tropical themes and dishes from other regions of the world, to government controlled eating booths in certain areas, like the Castries Market Food Court, to road side vendors operating from hastily put together huts on sidewalks to those that hawk their food from the back of their vehicles and even on bicycles.

Undertaking this review is the Ministry of Health which, over the years has been carrying out a campaign of inspection of food establishments in the country and issuing warnings to those who fall below the required standards.

“There is a need for reviewing the legislation dealing with food safety here,” Wen Gabriel, Chief Environmental Health Officer said.

The Ministry’s stance on food safety is in sync with that of the Caribbean Public Health Agency (CARPHA) which warns that foodborne illnesses are one of the most common public health issues in the Caribbean region increasing by 26 percent since 2010.

According to CARPHA thousands of people in the region become sick from tainted food each year. This, the regional body notes, demonstrates the need to further safeguard the region’s food supply.

Gabriel agrees and said that the Ministry continues to issue warnings to food handlers across the board, from hotels to restaurants to roadside handlers of cooked food.

“We have been dishing out warnings to retailers of cooked food whose establishments are below standard. After giving someone a warning the Ministry gives that someone a certain time to comply with the standard required.

Said Gabriel: “You find lots of people going into the business of selling cooked food, and many times, you will find that they are operating below standards. Even hotels are sometimes pulled up,” he said.

CARPHA last week convened a workshop in Trinidad & Tobago under the theme “Food Safety: More than Just a Health Threat” to, among other things, stress the importance of regional collaboration in foodborne disease surveillance and food safety.

At the workshop it was recognized that food safety systems in the Caribbean were weak in the areas of legislation, coordination and organizational capacity and that those responsible for foodborne diseases surveillance and food safety must develop national policies and frameworks for reducing foodborne diseases and improving food safety.

Trinidad’s Health Minister, Senator Dr. Fuad Khan called for a regional implementation plan for food safety so as to analyse, investigate and resolve issues as they appear at critical points along the food chain, encouraging workshop participants to work towards this goal.

The participants who came from across the region were told of their countries heavy dependence on the tourist dollar hence the need for them to protect the health and safety of locals and visitors, which is key to the sustainability and profitability of the tourism sector.

The Ministry of Health is aware of all of this and as such will undertake a food safety awareness campaign to bring to alert Saint Lucians on the necessity of preparing food at a certain standard and dangers of poorly prepared food to their health.

CARPHA, in a press release notes that mitigating the impact of foodborne threats to health is a key component in its Tourism and Health Programme.