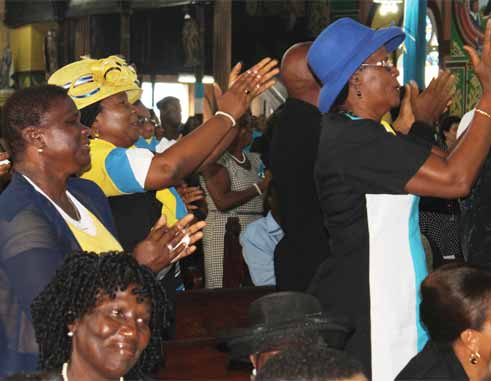 Hundreds of schoolchildren waving flags lined Peynier Street as the hearse bearing Sir Dunstan’s casket left Parliament building on Laborie Street and turned onto Jeremie Street before turning right into Peynier Street and halting at the church on Micoud Street.

Inside the church were hundreds of family members, friends, well-wishers government officials and dignitaries who came to say farewell to the man who specialized in the art-form, Prismism, and designed the Saint Lucian flag 48 years ago. The artist’s flag and paintings played a key role in setting the theme for the service.

Childhood friend, Derek Walcott, paid tribute to Sir Dunstan – affectionately known as “Apilo” – the way he knows best: through poetry. Walcott, whose twin brother, Roderick, shared a deep and lasting friendship with Sir Dunstan, also attended a tribute concert at the National Cultural Centre last Monday evening where he read a poem for his late friend.

Poet McDonald Dixon read a moving eulogy, elaborating on the friendship and advice that he and Sir Dunstan shared ever since their childhood. He also had some words of comfort for Sir Dunstan’s widow, Cynthia, who sat with her children and other family members just a few feet from her husband’s casket draped in white.

“There is nothing I can say to you, Lady Cynthia, short of bringing back Sir Dunstan that will console you,” Dixon said. “But as you relive those 63 years you spent together and the nine replicas the two of you created, assure yourself that Sir Dunstan continues to parade through those memories and in the lives of your children and grandchildren.”

Monsignor Patrick “Paba” Anthony, a longtime friend of the St. Omer family, delivered the homily in which he painted Sir Dunstan as a man of love who went through rough patches in his life but was nevertheless able to inspire an entire nation through his artistic genius. Monsignor Anthony said Saint Lucians can all reference Sir Dunstan’s tenacity to achieve greatness.

Living heroes, Monsignor Anthony said, need to be celebrated in the best possible way. Nevertheless, he called for the title of National Hero to be bestowed on the late painter posthumously. He implored Saint Lucians to nominate deserving Saint Lucians for national honours whenever such requests are made. He promised to start the process in Sir Dunstan’s case.

A resounding applause and standing ovation followed, prompting the first smiles on many faces in the church.

For his sterling service to country, Sir Dunstan was named a national cultural hero by the Folk Research Centre (FRC) in October 2007 and conferred with a knighthood in April 2010. He passed away on Tuesday, May 5 at 87 after becoming ill which resulted in repeated stays in hospital since last August. He is survived by his wife, Cynthia, and nine children.