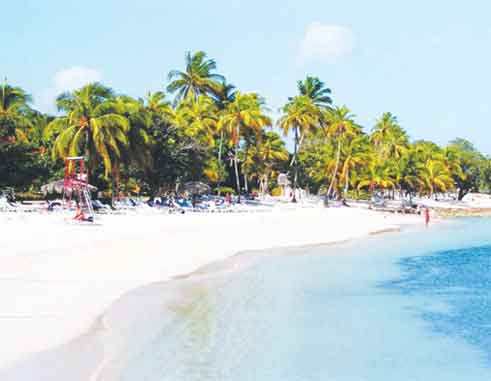 A Game Changer is a newly introduced element or factor that changes an existing situation or activity in a significant way.

Who is the Game Changer? Cuba! You may turn your head and say, ‘I don’t have to read that nonsense; I don’t believe it and we’re just fine anyway.’ That for itself may mean that you are not in tune with your audiences and it means that you are not capable to understand the importance of market intelligence. Subsequently you will not be competent to plan effective marketing strategies. Maybe you should read and know what is written about the competitors you are up against. If you don’t, fine. The people that you would hope to be your clients, do read it.

Only five months ago, The International Monetary Fund published a study called “Revisiting Tourism Flows to the Caribbean: What is Driving Arrivals?” In it were some conclusions that should be interpreted as “Hey, you guys in the Caribbean, you are losing since you are becoming too expensive!” The study finds that the nominal cost of an average one week beach holiday in the Caribbean is higher than in other beach destinations around the world. Tourism arrivals and expenditure are sensitive to both price and income factors in source markets. That simply means that people abroad who are planning a vacation are making price comparisons. Are you surprised about that? Wouldn’t you compare? They actually have to work to save the extra money to go on a vacation. Mind that the EURO has lost significantly against the dollar and you might say that dollar prices are 20% higher now.

Do you know what you find in every grocery store chain in Europe? Travel brochures. Many travel agencies are affiliated with grocery chains. It is their way to get to the masses. If someone trusts his favourite grocery store, they’ll trust its travel agency also for also having good deals. By picking up a vacation brochure with lots of offers for destinations around the world, in the shortest possible time, one can conclude how long one can stay somewhere at the lowest cost. If your Caribbean destination is not in that brochure, you may be missing out on something or you may be doing something wrong.

The Dominican Republic usually makes it big time in those brochures. But St. Vincent? Ask a European where that is. Or ask an American; they are famous for not knowing the difference between Sweden and Switzerland. Ask where St. Vincent is, or St. Barth. If you’re lucky, they think it is one of the US Virgin Islands. When they find out it is not, well that’s bad news. Dominica? Isn’t it called the Dominican Republic, a common questions is? Is it Cuba? Everyone knows about Cuba for decades, because it was always in the news for something or other. Now, the country is not only in the news, it gets free tourism publicity which budgets could not cover in the wildest dreams of any tourism board executive in the Caribbean.

‘Yeah, but Cuba is not all that attractive, because not everyone wants to buy cigars, and you can buy rum anywhere in the Caribbean.’ You’re right. So, let’s compare something else that you have in common: beaches. Just read what audiences read in the media and maybe especially online. By the way, did you know that Cuba also has a Trinidad? It is a town in the province of Sancti Spíritus, in central Cuba. Together with the nearby Valle de los Ingenios, it has been one of UNESCOs World Heritage sites since 1988. So, there is more for tourists than cigars, rum and vintage cars.

“Cuba may be a complex nation but one thing is clear as glass: its beaches are simply magnificent.” says LonelyPlanet. Hmmm, magnificent but that’s what some also say about the nude beach of Orient Bay in St. Maarten.

“Cuba is blessed with miles upon miles of white-sand beaches,” says BestBeaches. Now that is a different story. Can you truthfully claim that your island has miles-upon-miles of white beaches? Be careful now! Cuba’s coastline is several times longer than that of all the Lesser Antilles together. It simply means to audiences abroad, that when you’re in for a beach vacation in Cuba, you have a choice of beaches beyond comparison.

Let’s take another example with a bit more detail. According to Destination-360, an online travel guide:

“The Cuban beaches are simply some of the best in the world. With hundreds of them to boast, Cuba is ever-becoming a top consideration for beach vacations. Canadians and Europeans have long been coming to Cuba to stay at one of the dazzling Cuba resorts, most of which can be found lining one of the country’s featured sandy strips. Choosing the best beach in Cuba is a daunting task, as it really comes down to personal preference. There are certainly beaches in Cuba to fit any and every taste, and some can be found close to some of Cuba’s best attractions. Tourism at a good amount of the Cuban beaches is growing at a healthy rate, and with plans in the making to develop plenty more beach destinations, Cuba only seems poised to continue its march towards becoming one of the world’s most dynamic tourist destinations.”

What is the essence of my story? For years people like to put blame on the recession of 2008 if anything has not worked out. You might as well blame it on the Bossa Nova. In 2008, I was in charge of business development in an industry that was hard hit by the recession. The first thing I did was damage control and then quickly planned strategies to move forward and upwards again. A wait-and-see attitude doesn’t fit me. I never play blame games. There is Game Changer coming up in the Caribbean. Some may see it as if it is just a tropical storm coming and blowing over. Best is to be prepared for a hurricane situation and plan things now before it strikes not knowing how long the negative impact may last.