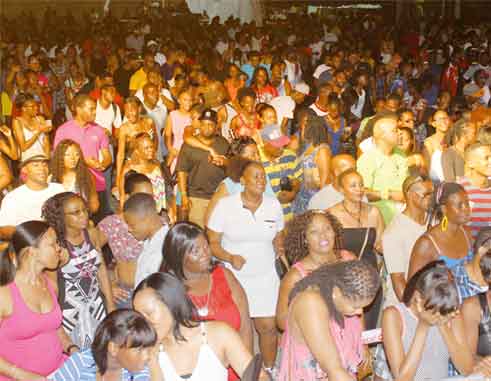 LAST Sunday’s official opening of this year’s Carnival season seems to have met the expectations of organizers and especially the hundreds of patrons who showed up at Samaans Park for the blast-off.

The costume bands, too, made a big impression on the patrons, displaying their colourful offerings for the season as they made their way through the crowd as part of the “gwanmouvman”.

Despite the official launch being scaled down this year – and relocated from its traditional Mindoo Phillip Park stomping grounds – the proceedings seemed to have gone down well with both its organizers and those who seemed to just not get enough.

Director of Carnival, Teddy Francis, told The VOICE this year’s official launch of Carnival – dubbed “Odyssey: Journey Into Carnival” — met its objectives. Francis said all things considered, the event was a success.

“We’re very elated with the success the launch enjoyed for a number of reasons,” Francis said. “We saw all the aspects of Carnival represented. It was also one of the earliest openings of Carnival so it gave an early jumpstart to the season, the kind of boost and energy that the festival normally needs at an early stage.”

Francis said the Carnival Planning & Management Agency’s decision to launch the season with an all-Saint Lucian cast of artistes paid off despite calls for the inclusion of foreign acts to boost the show. Early release of music by local acts was a crucial factor in organizers deciding to go with an all-Saint Lucian cast of artistes last Sunday. Francis said last Sunday’s official launch is a good indicator that this year’s Carnival season with be both a colourful and interesting one.

“If so early in the season, we’re creating such buzz, then you can imagine (what will happen) when the songs begin to take root. Everything indicates that we’re in for a bumper Carnival. It’s really a good start to the festival and the overall product beginning to take shape,” Francis said.

Francis also sang praises for the calypso tents for consolidating their energies and resources to ensure that this year’s calypso tents raise the bar. The first calypso tent show will be hosted this Saturday at the National Cultural Centre from 8:30 p.m. That show will feature calypsonians and soca artistes from various calypso tents. Francis believes such collaborations augur well for the improvement of the overall Carnival product.