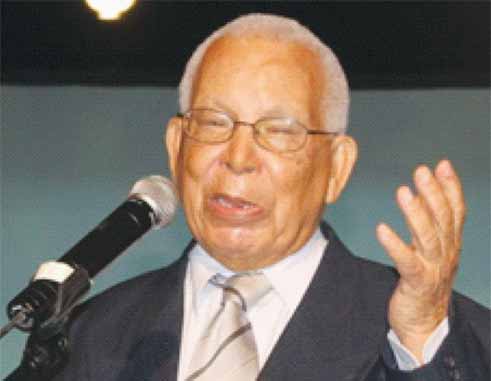 ACCLAIMED Saint Lucian composer, Charles Cadet, got a tribute that was on par with his musical genius last Sunday evening at the newly-refurbished National Cultural Centre.

Cadet, 90, known for composing such musical masterpieces as “Chanson Marianne”, “Ode to an Artist”, “Estephane”, “An Tan Sa La” and “Poinsettia Blossoms”, was the featured artist at the Cadet Concert, the inaugural of the Cultural Icons Series.

The concert was organized by the Cultural Development Foundation (CDF) in collaboration with the St. Lucia School of Music (SLSM) and the Saint Lucia Tourist Board (SLTB).

Over 100 musicians came together to give choral and solo performances in tribute to Cadet who has been able to bridge generations of Saint Lucians through his music. The large cast performed songs that fall into the musical genres Cadet specialized in – sacred, folk, jazz and contemporary.

One of Cadet’s newest compositions, “La Fen Jounen”, was premiered at the concert. The song, a folk requiem, was arranged and orchestrated by Gregory Piper. Joyce Auguste, who was instrumental in including Cadet’s songs in the school programme many years ago, and the Saint Lucia School of Music’s Alejandro Rutty, also orchestrated some of the performances.

Scores of patrons, including Governor-General Dame PearletteLouisy, turned up for the event that many later confessed churned out feelings of nostalgia and appreciation for a man whose music has served to inspire past and present musicians. Cadet, too, seemed thrilled with the high level of appreciation for his work.

“This has been a wonderful evening,” Cadet told the audience during a 15-minute speech after the concert.

Cadet said the evening was a nostalgic one and expressed appreciation for playwright Roderick Walcott (deceased) with whom he worked on many projects, including “Banjo Man” and “Song of the Guitar Man”.

“What I want to say to you tonight is how much I miss “Roddy” Walcott. So much of the music you heard tonight comes from the plays that he wrote and I was privileged to write music for them,” Cadet said.

While he expressed gratitude for the recognition he received last Sunday, Cadet said Walcott was another Saint Lucian who wore his country’s pride on his sleeves wherever he went. He suggested that the late playwright’s tribute should follow in like manner.

Born in 1924 into a family deeply immersed into music, Cadet had an abundance of musical influences around him. His father played the cornet, his uncle the violin, his aunts sang solos in the church choirs and concerts.

He soon developed an interest in Gregorian chants, as is evident in his “Ode to an Artist”, “An Tan Sa La” and “A Creole Kiss of Peace and Psalm”. His experience of choral harmonies inspired compositions such as “The Folk Mass” (composed in honour of Saint Lucia’s Independence from Britain in 1979) and “Dream Before Freedom” (a cantata in tribute to Jamaica’s 25th anniversary of Independence.