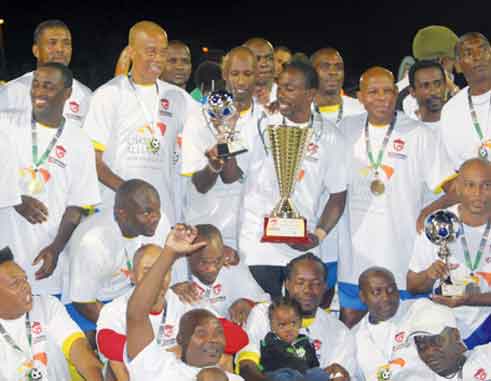 St. Lucia’s reigning Veterans Football Champions, Caricom Masters, are presently in Barbados where they are scheduled to participate in the Wanderers International Masters Football Festival.

Garvin Niles from Veterans in Sports Inc, organizers of the Veterans Football Tournament in St. Lucia said, “Coming out of the Veterans tournament 2014 – 2015 the champions would have been expected to participate in the Wanderers Festival. Basically we are keeping that promise and at present there are 25 players and three team officials representing Caricom Masters in Barbados”.

Caricom Masters are in Group G of the 32 team tournament in the preliminaries along with West Coast Ballers and Benfica from Barbados and Sunday Krew from Trinidad and Tobago.

Today Caricom Masters will play West Coast Ballers from 11.00 a.m. and Benfica from 4:00p.m. Both teams are from Barbados

Meanwhile, Head Coach Anthony Jn. Baptiste said his team has prepared well for the tournament. “Our preparation is going on fine, we never stopped training and the team has been active on the ball. Looking at the scheduling of matches, some of the games will be played in the midday sun. It is something we are used to in the Caribbean. We are accustomed to these conditions”.