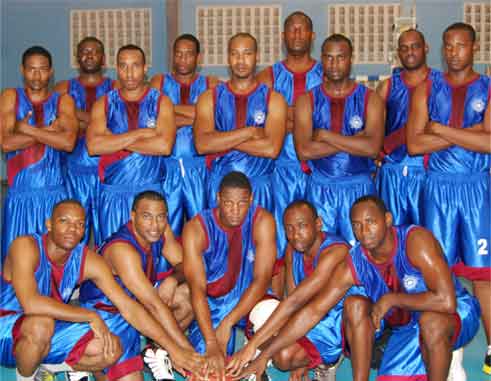 Another Win For Champs ‘Jets’.

THE second match up between heavyweights Courts Jets and the VBCC Warlords was one of seven games played in the KFC National Basketball League this past weekend.

On Saturday, in Soufriere, home team Soufriere Sulphur Stars continued to show their dominance at home with a rout of the Morne Gladiators 81 – 44, handing them their worst defeat in the competition this year.

Delirius Restaurant and Bar player of the game Tevin St. Jean had a game high 26 points and 6 rebounds. Linzel Alcee with 14 points, 9 rebounds and 8 steals. For Morne Gladiators, Mervin Augustin had a team high 11 points and 8 rebounds.

Gros Islet was buzzing with a double header also on Saturday, with the marquee game being a second meeting between defending champions Courts Jets and VBCC Warlords. But first, Combined Schools used a combination of skill and youth to their advantage when they eased past Sandals High Risers 81 – 56.

Player of the game Jean Michel Eloise was one dime shy of a triple double with 20 points, 11 steals and 9 assists for Combined Schools. Tristan James also contributed 12 points and 5 rebounds in the win. For Sandals, Orville Leo and RaideHippolyte both had 13 points.

The arch rivals took center court in game 2 of the evening with VBCC looking to avenge an earlier season blowout loss to the Jets. Fans of both clubs were visibly up for this game as were the players. VBCC looked good in the first quarter ending with a narrow 1-point lead 13 – 12. From then on it was all Jets even with a good fight from the Warlords who stayed close, down only 6-points 36 – 30 at the half.

In the second half, a good exhibition of basketball from both teams was displayed but VBCC was just never able to stop the offensive prowess of the splash brothers, Andre and Troy Louison. They combined to score 46 of Jets 79 points and were the telling difference in a 79 – 69 win for the current champions Courts Jets.

Player of the game Andre Louison was 5/8 from 3-point range and led all scorers with 26 points and 11 rebounds. Troy Louison added 20 points, 6 rebounds and 4 assists in the win. VBCC’s Nigel Butcher fought had for his team high 23 points, 7 rebounds and 7 steals in their loss.

On Sunday, the SALCC Court was the venue for another double header with Division 1 action starting first with BBC versus Lions. It was an impressive comeback win for the BBC team storming back in the second half after being down by 8 at the first half interval. They outscored Lions 51 – 39 in the second half to win in a close one 77 – 73. Rahim Auguste with his 28 points and 7 steals was the Player of the game. Kurt Raphael added 18 points and 8 rebounds while Craig Fontellio also added 14 points and 11 rebounds for BBC. FabianFlorton continued his fantastic form in this year’s tournament with a career high 30 points and 10 rebounds in a loss for the Lions.

Game 2 of the evening was a clash between two former Commercial Basketball League champions Police against Fire Service, who got the better of their combined forces 58 – 49 thanks to Marcian Calderon’s monstrous figures of 26 points and 26 rebounds. Owen Cazaubon added 16 points, 8 rebounds and 7 steals. Amil Octave had 19 points for Police.

Meanwhile, games continue this evening at the Morne in the KFC National Basketball League with Lions versus Combined Schools and Courts Jets against Micoud in Gros Islet. Both games will tip off from 7.00 p.m.