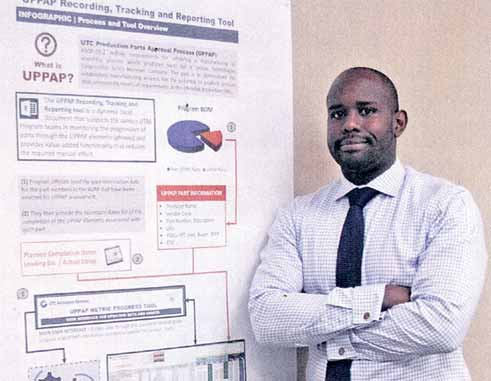 A St Lucian has created a computer tool that is proving value added to employees across United Technology Corporation (UTC) Aeroscape Systems based in Chula Vista, California.

Barney Charles is the son of Claudia and Benedict (“Beben”) Charles. He grew up in the Black Mallet, Castries. At the age of nine he went to the United States and resided in Brooklyn, New York. He holds two college degrees from the University of Michigan: a Bachelor’s in Operations and Industrial Engineering and a Master’s in Engineering Management.

Charles has accumulated a wealth of experience with Operations that have afforded him the opportunity to travel far and wide. He has been to over 20 countries including Afghanistan, where he did a seven month deployment as a production planner, project engineer and theater engineer for the U.S. Army.

According to an article in UTC’s newsletter “SKYLINES AEROSTRUCTURES” last month, Charles has had diverse development experiences taking part in the Corporation’s Operations Leadership Programme (OLP) which exposes members to eight month rotational assignments within its Supply Chain Management, Quality and Manufacturing disciplines over a two year period.

But an experience during his current and fin al rotation as part of Aerostructures’ Supplier Performance team has definitely been one of the highlights of his time in the OLP. Specifically, he was able to create a computer tool that greatly reduces manual effort that is proving value-added to UTC employees, the article states.

The innovation is known as UPPAP Recording, Tracking and Reporting Tool. It is a way of demonstrating that a manufacturing process has the potential to deliver a product that consistently meets all requirements at the intended production rate.

Said UPPAP focal John Panek: “This tool has been so well received that the UTC Aerospace Systems Central Quality Team has adopted it for use across all business units.”

Charles said, Panek, knew he had had some previous experience with developing reporting tools enabled with macros—single computer instructions that expand automatically into a set of instructions to perform a particular task..

He added: “He (Panek) requested that I take a look at a document that contained some slides and a database structure to determine how macros could help to dynamically update various progress charts used on the Power Point slides displayed during leadership and business unit UPPAP status reviews.

“I touched base with my manager…to receive approval to support this effort. From there I went on to develop the tool and make continuous improvements based on functionality and features I thought would be value-added based on regular feedback from John.”

As to the future, Charles said: “I’m hoping to find a role that allows me to leverage my current skill set, while affording me the opportunity to develop and hone some key competencies—such as talent development, business/financial acumen and strategic decision-making. I hope to continue making a positive impact in whichever organization I’m fortunate enough to join.”