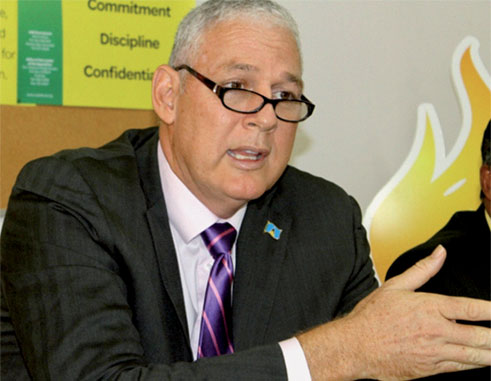 LEADER of the opposition United Workers Party Allen Chastanet appears to have found himself what political pundits describe as a relatively “safe” seat‎, ahead of general elections constitutionally due in 2016.

Chastanet who failed to win the Soufriere seat in the 2011 elections, will contest the Micoud-South seat in the next general elections, a traditional stronghold of his United Workers Party.

Chastanet’s candidacy was approved Tuesday at a meeting of the UWP Micoud-South constituency branch.

Incumbent Micoud-South MP, Arsene James confirmed the decision while also denying persistent reports that he was paid by Chastanet for the seat which even his detractors agree is Chastanet’s best shot at getting into parliament.

“I think the intention is to destroy Mr.Chastanet,” James, a former Education Minister said, adding that, “whoever is doing this will eventually pay for it because there is no truth. I may be hungry but I’m not greedy. If I sell the seat I will be selling the people,” James said.

He said he decided not to contest the upcoming general election because, “I’m not getting any younger.”

James also promised to work with Chastanet to ensure that he wins the seat when the election is called.

The decision now has to be endorsed by the United Workers Party’s National Council.