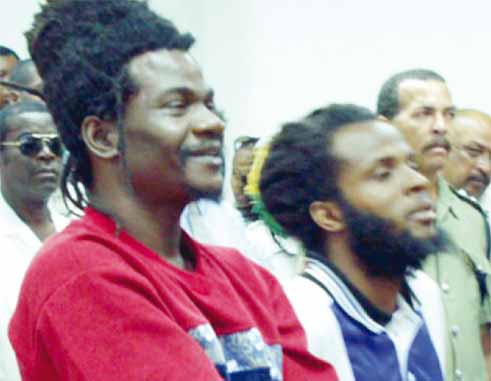 THE massacre at the Cathedral of the Immaculate Conception 15 years ago in which a Roman Catholic priest and a nun were bludgeoned to death by two men was perhaps one of the most horrific crimes in the history of St Lucia.

For 15 years people have asked the same chorus of questions: What drove these two men to commit this crime? Were they motivated by religious ideology? Were they insane? Are they remorseful? And if they were ever released from prison would they ever do it again?

The television documentary series UNTOLD STORIES has gone inside the mind of Kim John and Francis Phillip to extract and deliver the answers to these burning questions for the nation’s elucidation. This two part documentary that has been nearly two years in the making will be aired at 8:00 p.m. tonight on Helen Television System.

UNTOLD STORIES Executive Producer Dale Elliott told THE VOICE yesterday that he interviewed the two accused men two years ago for the programme. He also criticized recent attempts to stop the screening of the programme.

On April 15 Registrar Charon Gardner dispatched a letter to Calabash Television warning that the Kim John-Francis Philip case was before the court and there were legal restrictions on coverage of the case, according to Section 380 of the Criminal Code of the Revised Laws of St Lucia,

Said Ms. Gardner’s letter:“….the airing of such a feature is highly inappropriate in the circumstances. We kindly ask therefore that you refrain from airing this and any related segment of the show until this matter is fully adjudicated on.”

Although Calabash TV granted the Registrar’s request, Elliot yesterday questioned her authority in issuing such an instruction to the TV station.

“I do not believe the Registrar has the power to do what she did”, Elliott said, who confessed that he had been legally frustrated by the Registrar’s action. He said: “I am reliably informed that The Registrar’s jurisdiction is over the courts, not over private citizens.”

Elliott said he would have understood if the prosecution, the defence or even the judge in the case had made a such a decision, arguing that that airing of the programme would have prejudiced the trial. But the trial has long been over and John and Francis were only up for sentencing.

Still, with the men sentenced to life imprisonment for manslaughter last Friday, Elliott welcomed the opportunity to show his programme which he said is a two-part documentary that has been two years in the making.

He said the programme which aired on Calabash TV last night and will premiere on HTS tonight, examines the state of mind of the two accused men, their relationship and the circumstances which brought them together to plan the Cathedral massacre.

The 2000 New Year’s Eve attack shocked the nation for its gruesome nature. Phillip and John were sentenced to be hanged for the crime and showed no remorse when sentence was pronounced. They subsequently appealed against their sentence to the Privy Council and won. The case was sent back to St Lucia for sentencing and the men pleaded guilty to the lesser charge of manslaughter.

They were sentenced to life imprisonment last Friday by Judge Francis Cumberbatch. A life sentence here is equated to 25 years. Both men have, however, already served 14 years for the crime.

While no one appears to be speculating about that aspect of the case, the wounds suffered by those who were injured and the families and friends of the two killed were relived again last Friday.

Killed in the fire and knife wielding attack launched by the two men were Sister Theresa Egan, of Ireland. She belonged to the Order of St. Joseph of Cluny, an Irish order that at the time was involved in education programmes on the island for nearly 100 years.

She was bludgeoned to death with a piece of lumber. The other fatality was 62 year old St Lucian priest Fr.Charles Gaillard who was set on fire.

Thirteen worshippers were doused with fuel and set on fire suffering various degrees of burns while they were in the church pews.

John and Phillip, when captured, identified themselves as Rastafarians. They later told police that they were following their god’s orders by attacking the church. The men allegedly entered the packed church during Communion, dousing people with fuel and then setting them on fire with a blow torch.