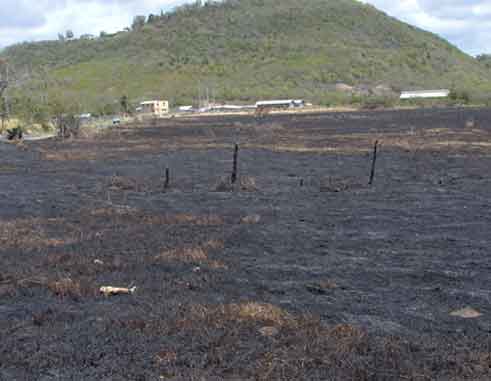 CLASSES at the Plain View Combined School at La Ressource in Vieux-Fort were disrupted, and residents smoked out of their homes by a number of bush fires in the area recently.

The fires which belched out plumes of smoke occurred at and around the communal pasture, located a few hundred metres from the Hewanorra International Airport.

Residents had to endure the discomfort for a few days because whenever the fire officers extinguished a fire in one area, another appeared the following day in a different area. There were three bush fires in the area within a few days.

On one occasion, the billowing smoke engulfed the primary school so badly that a false alarm was raised in the community that the school itself was on fire. Students had to be sent home hours before the usual time.

Vice Principal of the Plain View Combined School, Ella John, described the problem as very serious. She said that when they realized that the school was engulfed with smoke they put their emergency plan into action.

“When we saw the amount of smoke in the school we quickly opened our emergency kit…,” she said.

John said they had to act quickly to protect the students, some of whom are asthmatic.

According to John, they encountered a bit of problem dealing with the situation because of the difficulty in getting in touch with the parents of some students, many of whom were at work and lived some distance from the school. She said because of this, some teachers had to stay with the students at the school until their parents arrived.

She recalled a similar situation over a year ago, when the Vieux-Fort landfill emitted smoke for several days, forcing the school to close for a few days

Adrian Monrose, a resident of the area said when he realized that one of the fires was getting close to his home he called the fire department, adding that they took some time to respond because at the time they were busy extinguishing another fire close to the airport.

“My whole yard was filed with smoke. I was very worried… I realized that the fire was getting closer and close to my home” he said.

Percita Crick, another resident said: “It was terrible. When I saw the amount of smoke in the area I had to quickly close my doors and windows.”

She added that she has experienced smoke in the community by bush fires in the past but this was the worst.

The billowing smoke also affected motorists who had to divert from their usual route going into and out of Vieux-Fort town.

Joseph Joseph, the southern divisional officer of the fire service said many of those bush fires are caused by people who are just being mischievous and in some cases careless.

He also called on persons wishing to burn bush or refuse to contact the fire department for guidance. Joseph said, however, that the department does not encourage such burning during this time of the year.