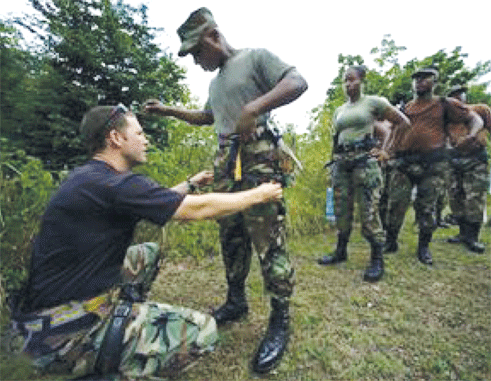 SUNDAY night I, like the majority of the nation swallowed a monstrous and bitter pill and I’m still trying to catch my breath.

I’m referring to the Prime Minister’s address on the investigation into the alleged extra-judicial killings by the Royal Saint Lucia Police Force titled “A DISTRESSING ISSUE TO CONFRONT”.

I didn’t get to see the address which aired on radio and television so instead, I read it and my what a read that was.

Now I knew that this Implementation Agency for Crime and Security (IMPACS) Report was a damning blow for the RSLPF but oh…my…gosh…I wasn’t ready for this. This blow has sent shockwaves from the core of our police force and is set to take down all in its range.

I can feel a tremor all right, but this one is from a collection of crooked cops, businessmen and politicians quaking in their boots.

To those crawling out from under their rocks with sleep still in their eyes, here’s the heart of what you missed.

This is a quote from the Prime Minister’s speech which states the findings of the IMPACS team of investigators:

“The report confirms that ‘the blacklist or death lists’ referenced by the media, human rights organizations, victim’s families and citizens alike did exist.

“More alarmingly, the investigators report that ‘all the shootings reviewed were ‘fake encounters’ staged by the Police to legitimize their actions.

“Revealingly, the report suggests that “the crime problem in Saint Lucia is facilitated by corrupt politicians/government officials, business persons and police officers.”

“Of serious concern too, is the fact that the investigators also reported that in the course of the investigation, some senior officers did not co-operate with them. They reported that the main server of the computers used by some members of the High Command of the Police Force was deliberately tampered with. In two instances, the operating systems of the computers were altered to place the supposed contents beyond “the timeline of [the] investigation” or probe.

“The report has also recommended that some senior police officers be held accountable for their actions or for their failure to take appropriate action when the alleged killings occurred.

“The investigators also concluded that what operated during the period under review was an environment of impunity and permissiveness designed to achieve the desired results. Wilful blindness existed in respect of the Commissioner of Police and particular members of his leadership and management team.

“The investigators have recommended that ‘all police officers involved in the unlawful killings of citizens in respect of the files reviewed must be prosecuted.
In all, the investigators made some thirty one recommendations many of which touch on the management and administration of the Police Force”.

If this doesn’t take the wind out of you then I don’t know what will because this information is like a swift Bruce Lee kick to the gut.

Now on this matter, I feel so conflicted because I feel for both sides. I won’t lie or hide to say that I was one of the many law abiding citizens who breathed a sigh of relief after the chokehold that St. Lucia was held in by merciless criminals was loosened after Operation Restore Confidence was launched in May 2010.

Yes, I know that a life is a life and all life is valuable but like I’ve said on many occasions, being in the media has brought out a sinister side of me that I never imagined having and that sinister side felt that maybe it was a good thing that some of the people terrorising the nation with murderous violence, fear and lawlessness were taken out of the equation.

Lest we forget, murders and violent crime around that time were rife. People were being attacked in broad daylight and in full view of any and every one. The law really was confined and was seemingly helpless. And the worse part was that when perpetrators were arrested, no charges could stick to them because there are so many loose ends in our law books that any fresh from school lawyer could get them off…vigilante justice became a necessity (in my opinion anyway).

Now this is where the conflict sets in because two wrongs can NEVER make a right so like the PM rightly said: “We cannot commit a crime to solve a crime.”

It is in that same respect that I say that whilst I truly believe that something needed to be done about the high criminal activity running the island, the police danced and pranced over the line separating lawfulness and lawlessness.

If you take to the streets, many will say that the police force is filled with gun toting bullies with itchy trigger fingers (and no, those were not my words) so it’s a great thing that this report has exposed this behaviour.

I’m hoping that things will change for the better but there are two major concerns that follow this hope: I hope that this report hasn’t made the masses less confident in the police force and caused all officers to be painted with the same tainted brush. I also hope that this doesn’t cause a surge in crime with a seemingly broken police force…sigh this is all so terrible.

I’m battling with a number of feelings including sadness, disappointment, anger and anxiety over this report and the thought of the implications that follow makes me feel sick.

The businessmen and politicians involved, hmmm brace yourselves because I can only speculate that it won’t be pretty if or when your identities are revealed.

It is never a good thing when a nation is divided but this has left the nation torn to shreds and this is a real mess that I doubt can be cleaned up soon if at all.

With all the questions about credibility floating around right now, it’s hard to know who to trust and believe.

I must take this time to applaud Dr. Kenny Anthony for coming out and delivering this address. That took some guts to address something so unfavourable about the island and to expose the very people who are meant to make our lives better and safer.

Whilst it must really suck to be him right now, I feel even worse for the DPP…I would most definitely not want to be the one faced with the ultimatum to either prosecute the island’s top cops and then some to get back into the good books of the U.S. or don’t prosecute and St. Lucians remain sitting ducks with absolutely no help from the super nation.

I, like all St. Lucians will be monitoring this situation with baited breath to see how it unfolds…monitoring and praying.