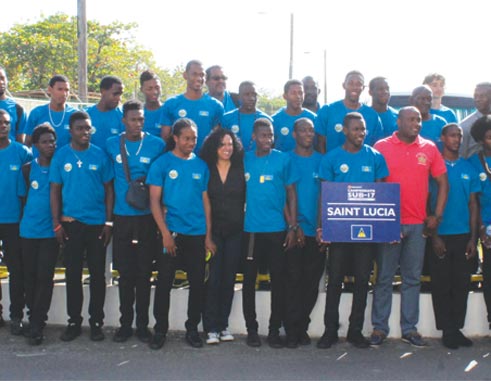 Despite Heavy Losses In Four Matches

ST. LUCIA National Under -17 football team arrived from Honduras Sunday to a special welcome that was organized by the Ministry of Youth Development and Sports in collaboration with the St.Lucia Football Association.

The squad was defeated heavily in all of the four matches played in Honduras.

Manager for the team Timothy Moffat in his brief remarks to the small gathering said, he was proud of the players because they had stepped up to the plate. “You’ve taken up a challenge in Honduras. We understand what the coaches were talking about when they explained to us, you had to be switched on all the times in terms of what we needed to do on the field of play”.

He added: “I just hope we can find support to continue building football. In the summer the Under – 15’s too have a tournament similar to what you took part in two years ago. It is something we see start happening in St. Lucia and I think it is something we can continue to develop. What we have done is amazing and it is immensely disturbing to everybody outside because we came from nowhere and we did this”.

Edward said, “he really wanted to be there in person to send a very strong message to the team from the highest levels of administration in this country.” I want to tell you how grateful we are for the manner in which you represented this country”, he said.

Edward continued; “The journey did not start in Honduras; you started many months before you actually went on to Honduras for the final leg of the competition; from there we were inspired by what we heard about the team. A number of players were in the squad but not able to make the final cut for the final leg, but collectively you made our country proud, your every performance was being followed and there were people who expected you to be demoralized by some of the teams that you played against”.

He added: “Mexico is a giant in World football. You look at their history, you look at their accomplishments. They have been there with the best the world has to offer. So when you can step onto a pitch against a Mexico, despite ending up on the wrong side of the results, but your performances individually in that particular game were commendable. We were following you via a medium that was available and we were extremely proud of the effort”.