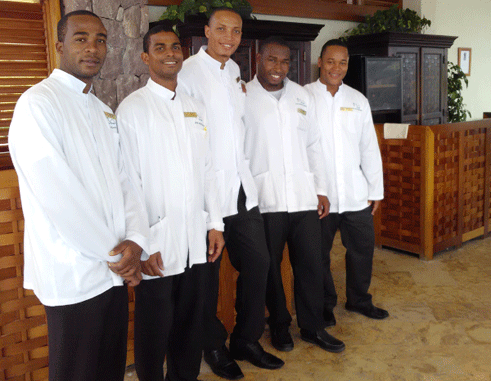 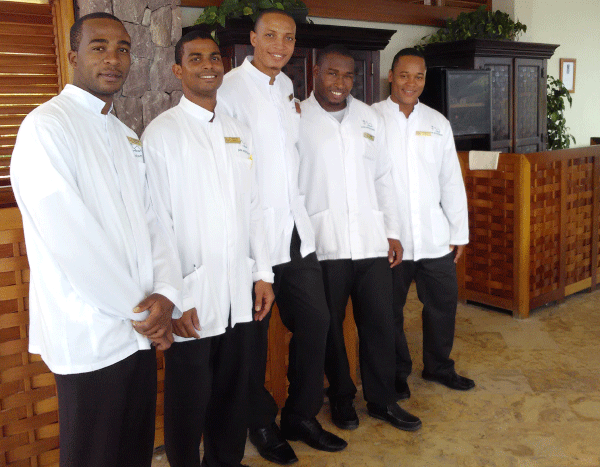 IT has won almost every possible award in the highly competitive world of first class resorts.

A recognizable name in international travel and tourism, Jade Mountain not only talks the talk and walks the walk, it lives up to its boast of not only producing private infinity pools in each of its sanctuaries (rooms) but also magic, yes magic!

It was a magical moment last year for guests dining at the Jade Mountain Club when in a blur of movement, former captain of the West Indies cricket team, Saint Lucian Darren Sammy caught a flying glass with his left hand seconds after rising from his dinner table.

To hear a member of the enthusiastic team at Jade Mountain Club, Jerome Gustave, talk about that moment, spontaneity, dexterity and a bit of fairy-tale enchantment came together to produce that stunning moment.

“Sammy was on his way out, after finishing dinner. The wind was blowing strong that evening. The glass was on this table and Sammy was sitting on the table opposite. A strong wind lifted the glass and flung it across the room right in Sammy’s path. He caught the glass with his left hand,” Gustave said.

“It must have been a magical moment,” The VOICE asked.

And he is not the only one with such thoughts. The rest of the team thought the same. If Jade Mountain is known for its excesses in organic architecture which celebrates the stunning scenic beauty which surrounds it, then the team at Jade Mountain Club led by Dwight Jules is also known for their charm.

Don’t know what drink to order on entering the Club? Have no fear bartender, Davidson Moffat will set you up. If you miss him then Gustave is there. His talents shine through not only on the dining floor of the Jade Mountain Club but also on the cricket pitch. He’s an excellent cricketer as well.

The rest of the team is made up of NeigeCadette, the one who always steps away from the camera, despite his strong interpersonal skills, and Lawrenson Springer, a team player to the max, easily proven within the first few minutes of entering the Club.

It’s one thing to read about the exquisite ambience of Jade Mountain in the glossy magazines that focus on tourism and travel, it’s quite another to personally experience the superb elegance of the place. It is one the magazines cannot capture. Not even the most telling pictures can compare with the ones taken by the naked eye.

The handiwork of God and man is clearly seen with each pool in each room or sanctuary. The pools are not called infinity pools for nothing. Words may create a good image of God and man coming together to create Jade Mountain, but nothing presents a better image than seeing it ‘live and in living colour’.

Pages upon pages can be written about the marvel called Jade Mountain which grew out of the architectural mind of its owner Nick Troubetzkoy. However, with space being limited, this will not be the case today. But it is worthy to note that the resort produces its own chocolate.

The chocolate is 100 percent Saint Lucian made. The cocoa beans used come from the resort’s very own Emerald Estate in Soufriere where the cocoa trees are grown.

The chocolate bars, which are sold exclusively at the resort’s boutiques and nearby Anse-Chastanet Hotel are all hand-made with the ingredients used being only cocoa beans and sugar. The chocolate production story is quite a fascinating when told by Chef Wouter. The cocoa beans come from the farm to the small room at the resort called the chocolate factory. It is there that the story becomes fascinating and where chocolate bars, all natural and organic, with different amounts of cocoa are made.