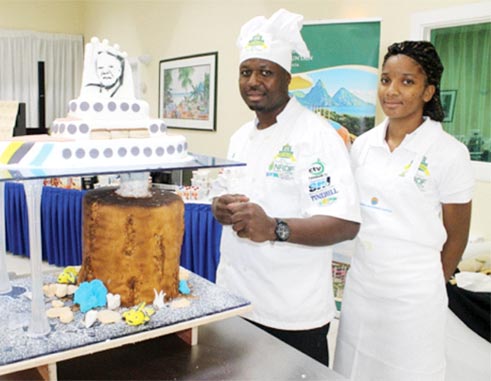 WHEN Ronald Estephane began his stint in the tourism industry as a sanitation worker at Rendezvous 15 years ago, he had no idea what his future in the industry would be. Being 20 at the time, however, did not mean that he was too young to aspire to a higher station in life. Fifteen years later, the junior pastry chef has demonstrated that humble beginnings can definitely lead to success and a rewarding career if only one believes and works really hard.

Originally from Derniere Riviere but now residing at Praslin, Estephane is currently employed at Coconut Bay Beach Resort & Spa where he’s been a pastry chef for the past nine years. But the culinary journey he’s been on has seen him move from place to place and grow from strength to strength. Here’s how one of the best Saint Lucian chefs today did it.

Three months after joining Rendezous, a sous chef, Swain Louis, was drawing some Christmas designs on Styrofoam one day to decorate the restaurant. Estephane offered to help but Chef Louis turned down such assistance. After declaring to Chef Louis that he was better at it, Chef Louis broke the pencil in two and gave Estephane a shot at it. Estephane’s talent was impressive.

“We decorated the place and shortly after that he told the boss how good I was at it,” Estephane said. “So they transferred me from my sanitation post and assigned me to decorate the buffet every day.”

Soon after that career-changing moment, Estephane’s boss informed him that a pastry chef had been fired and encouraged him to sign up for the vacant post. Estephane declined at first, citing his lack of knowledge in pastry making. That’s when his boss told him that while he (Estephane) did not recognize his talents, others had. Being an artist, Estephane took up the challenge, hoping that his artistic skills would lead the way.

“Off the top of my head, I learnt an a la carte menu in two weeks. Within the first month, I won the award for “Employee of the Month”. Shortly after that, they sent me to take an intermediate course in baking and pastry – but nothing to do with cakes,” Estephane explained.

In 2003, Chef Louis decided to leave Rendevous to take up an executive chef post at Club St. Lucia. He offered Estephane a pastry chef post at the new hotel and – as he had done previously – Estephane was hesitant. Again, Estephane gave in to Chef Louis’s encouraging words.

At Club St. Lucia, Estephane soon got used to making wedding cakes, catering for up to seven weddings daily. He specialized in using whipped cream to make the cakes at first but at the insistence of Louis in 2004 took a course in cake decorating.

“I used to take home bits of fondant and try to do flowers and stuff before taking the course. After signing up for the course with NELP, the teacher noticed that I had no basic training in the subject. So she asked me to step out of the class,” the 35-year-old chef said.

Estephane protested, telling the instructor that he had already paid the course fees. She relented and allowed him to take the course. The first day of class, students were to create carnation flowers. When the instructor saw his work, she could not believe he had done it in class that day. He did it again for her to see.

In 2006, Estephane left Club St. Lucia and went to Coconut Bay Beach Resort & Spa. A line staff in the pastry department told him there was an opening. After attending the interview, he got the pastry chef position. Soon after that, he met a Thai chef who specialized in fruit carving. So impressed was the chef with the swan that Estephane carved out of a watermelon that he gave the young pastry chef a carving knife and a book on the subject. Even though the book was written in Thai, Estephane soon learned the art by just looking at the pictures. His culinary skills soon saw him catering for important functions, including Governor-General Dame Pearlette Louisy’s birthday at Government House.

Estephane said when the invitation from NRDF got to Coconut Bay Beach Resort & Spa last December, his boss, Executive Chef Veejooruth Purmessur, initially informed him that he was not the first choice to represent the hotel in the NRDF/SLHTA Cake Challenge. After no other staff member took up the challenge, Estephane said he approached the boss who in turn recommended him for the challenge. In early February, an email came from NRDF, informing participants that the competition was still on.

“At that point, my heart started pumping really fast. In fact, I had not even practised for the competition. All I did was listened to an old speech from Sir John Compton on Independence. He said something like: ‘If you’re planning for one year, plant bananas. If you’re planning for five years, then plant trees. If you’re planning for ten years, you have to educate yourself.’ I saw that vision of us coming from bananas and now doing great things in tourism. Capitalizing on that theme was the goal for me,” Estephane explained.

After several drawings, Estephane came up with the concept that won him the judges’ hearts and the challenge. He created a passion fruit cake with cocoa rum gel. One of the criteria of the competition was that each participant must incorporate the cocoa stick into their presentation.

He explained the theme he chose for the winning cake: “The theme for my cake is that we’re journeying from the banana industry to the tourism industry. I also captured the marine life to explain the beauty of the ocean. The brown log stands for the people.

The cruise ship represents tourism and Sir John Compton is also represented since he was the one who transitioned us from bananas to tourism.”

On Friday, February 20, six participants transformed Mega J into culinary central where they had four hours to bake their cakes.

The next day, they were in the Bay Gardens Conference Room where they had six hours to decorate their cakes. His assistant on the day was Leandra Augustin. It was no easy feat, he said, having limited time to prepare his creations while teaming up with someone he had not met previously. Estephane expressed gratitude to Augustin for her assistance and ensuring that things went smoothly throughout the process.

“It was very challenging. It definitely wasn’t a piece of cake,” Estephane said. “One of the challenges I faced while baking my cakes was that the butter was rock solid. But I did well because experience has taught me that when that happens, you have to chop the butter into small pieces and allow it to whip by itself first before you can attempt to do your mixing.”

While the judges deliberated at the end of the competition, the 6 participants were sent to a room to await the results. All of the other participants’ eyes, Estephane said, were on him. That’s when it occurred to him that his cake might do the trick for the judges. When the judges called the shortlisted three chefs forward, he said he knew he had won the challenge.

By winning the challenge, Estephane has earned a one-week all-expenses paid internship at Johnson and Wales University Culinary Institute (Miami Campus) and a trophy. The winning cake was also showcased at the Prime Minister’s official Annual Independence Cocktail that same evening. Estephane said he’s already looking forward to the next big step in his career.

“I’m really hoping to grasp as much knowledge as I can from my stay there. Having tried out to be part of the Saint Lucia Culinary Team last year, I placed third in the dessert category at the cook-off so I did not make the cut to represent the island in Miami. Hopefully, I might have better luck this year.”

Estephane and Chef Purmessur also represented Saint Lucia in a chocolate show in Barbados from March 4 to 9 where they shared the same stage. The two demonstrated how cocoa beans can be used in a variety of ways at the inaugural Barbados Chocolate Festival and Conference.

His advice to upcoming chefs: “Many times we find ourselves facing many difficulties. Too often we do not prepare our minds for the challenges, almost thinking that we’ve already failed. But nothing beats a try. It’s hard work – definitely not a piece of cake.”