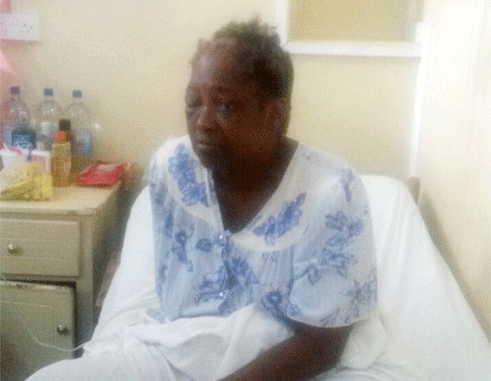 A 31 year old public servant has taken the bold and courageous step by reaching out to the local media in a bid to shine light on the scourge of domestic abuse and expose the ordeal of her very own mother.

The distraught woman who identified herself to The VOICE as Ms. Joseph said her mother is constantly being beaten. However, an incident which took place on Sunday night which landed her mother in the hospital was the final straw.

She claimed that her 55 year old mother, Maria Joseph of Monchy was beaten severely by a man on Sunday night who allegedly hit her over the head and other parts of her body with a wooden post caused her to bleed vaginally,and broke a mug on her face.

“This time”, Joseph said, “there was just too much blood to ignore”.

Joseph said her mother was taken to Victoria Hospital via ambulance and was given stitches to the head, medication to stop the bleeding and was discharged on Tuesday.

Whilst the daughter has praised the ambulance service for their response, she has sung a different tune about the response or lack thereof by the Gros Islet Police.

She said the police have informed the family that the matter is under investigation, however, there was been no arrest up to yesterday.

Joseph said: “I’m not going to push the police to do their job but what I’m saying is at the end of the day, if somebody harms another, the police has to step in to at least make them acknowledge their wrongdoing but right now, nothing is being done…the police have made no arrest”.

Ms. Joseph also spoke directly to Police Commissioner, Vernon Francois: “Had I dealt with the matter myself, it would not have been nice but now I’m asking in good faith, Mr. Francois, could you please step in? Because it is not okay for this man to get away with what has been done”.

Ms. Joseph admitted that both her mother and the man are heavy drinkers. She also admitted that as a result of her mother’s alcoholism and stubbornness, they have been estranged for many years.

She said: “I’ve tried repeatedly to get her away from that man and move on with her life”.
.
She said that she had tried for many years to show her mother a positive way forward but she refused to listen. For this reason, they don’t get along.

Joseph remarked: “When people are old enough and they make decisions, even though you’re their child, they figure…who are you to tell me what to do?”

Ms. Joseph broke down when speaking of the impact that the incident has had on her family, especially her mother’s sister. “I feel sorry for my aunt. It’s taking a toll on her. She’s taking it so hard. She’s tried to maintain a close relationship with my mother but again, she is tired of speaking. My aunt is so tired and now she even put her hands up in the air and asked what else can she do?”

Ms. Joseph said her mother is afraid to speak out about the matter and press charges against the man but said that this was not a decision for her to make. The police ought to have got involved.