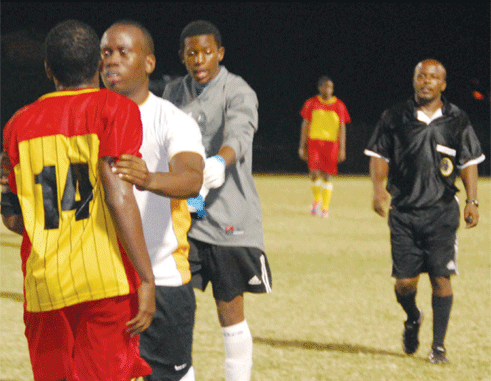 IT is always a delightful experience when residents in a community come out in the late afternoon or early evening to witness a friendly game of soccer played between teams from the community itself.

The atmosphere of sociability, pleasantness and approachability that is associated with such gatherings brings out the community spirit in force. It is at gatherings like these that residents meet residents and discuss issues that affect them in the community.

Sunday night at Marchand was one such gathering. The soccer teams were from the Marchand community, one called ‘B-One’ and the other ‘Bagatelle’. A sizeable crowd was on hand watching the game, under the newly installed lights in the now popular Marchand Soccer League.

Then disaster struck, somewhere in the 80th minute of the game.

The linesman near the sheltered stand slowly collapsed to the ground. Astonishment rippled around the playing field. One expects players to go to ground from a rough tackle, sheer exhaustion, cramps, etc., not a linesman.

The game came to an abrupt stop as the referee quickly moved to the side of his fallen officiating teammate.

The fallen linesman, a young man just beginning a career officiating soccer matches, limped to the other side of the field in an effort to continue his duties but could not. He collapsed again. It was at this point that the game was called off, not because of the distressed condition of the linesman but as a result of the act that led to his distraught condition.

Someone from the crowded stand had thrown a missile at him.

This senseless act of aggression spoiled what was being viewed as a wonderful display of community togetherness. It also threw a damper on the efforts of those involved in producing the Marchand Soccer League. No conceivable reason could have been gleaned for the missile throwing incident that almost cost a young man his life.

As onlookers walked out of the enclosed structured that houses the Marchand Grounds and the Mindoo Phillip Park one of them was heard asking whether police presence must always be at sporting events whenever they are held in Marchand.