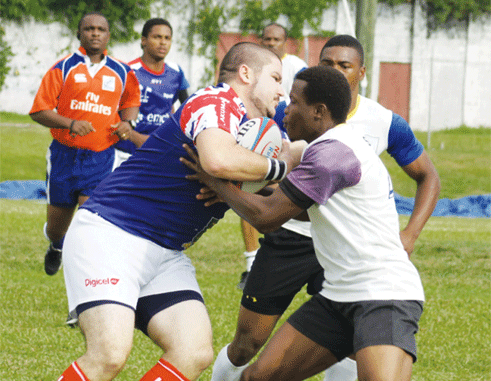 IN front of a small, but supportive crowd St.Lucia Rugby Football Union (SLRFU) went down 22 to 16 to the British Virgin Islands in the Men’s North American and Caribbean Rugby Association (NACRA) 15’s competition at the Mindoo Phillip Park on Saturday.

The encounter can best be described as a fast paced and tactical one as the BVI from the first whistle showed that they meant business and wanted to avenge their losts against the host last year.

Despite their dazzling performance, runs and the relentless pressure from the BVI, the home team was up to the task giving it their best on the square, but it would be the BVI team that would surge ahead with a 10 – 7 lead at the half time whistle.

Immediately following the resumption St. Lucia went ahead 14 – 10, but the BVI team kept to the game plan and in the dying stages of the encounter was able to secure another try and a penalty to emerge winners.

Recently re – elected President of the SLRFU Clovis Samuels spoke to the VOICE following the encounter. He said, “It was a hard fought game as BVI beat us by a try and one penalty. It was revenge in some ways for them as we defeated them last year. Our next game is against St.Vincent and the Grenadines on March 21 at the Mindoo Phillip Park and we are hoping to do a lot better than we did”.

Asked if he was satisfied with the level and quality of play exhibited by the St. Lucia teams he replied: “The game in itself was good. It was hard fought but I am disappointed in our performance, because we had a progression coming from last year. We didn’t play to our full potential and the kind of preparation we had heading into this encounter says a lot But if you don’t play as a team it will be difficult to win anything and today was an example of that”.

Samuels added: “We had to tighten up on our defence. Last year we were down by 15 points and within 10 minutes we scored 15 points. That’s how we play. Willing is one thing, but playing together as a team is another and that is where we went wrong. Some of the players we pin our hopes on did not come to the party in the manner we expected them to. Kudos to the BVI they did well”.

Samuels said there were positives coming out of the encounter. “For instance, the way we played generally, even though there are areas we need to work on, the scrum was terrific because we really push them around and that’s a strong positive for us”

Asked what areas St. Lucia need to work on before playing SVG in three weeks time? Samuels said: “The first thing is the physiological and mental preparation. We have to forego the I and I mentality because it is a team sport and we have to work as a unit and not individuals. This thing is not a play, this is a serious business even though we are doing it on an amateur level. Mental preparation has to be the key thing going forward. The fitness and technique were there, but the application is what that is beating us”.