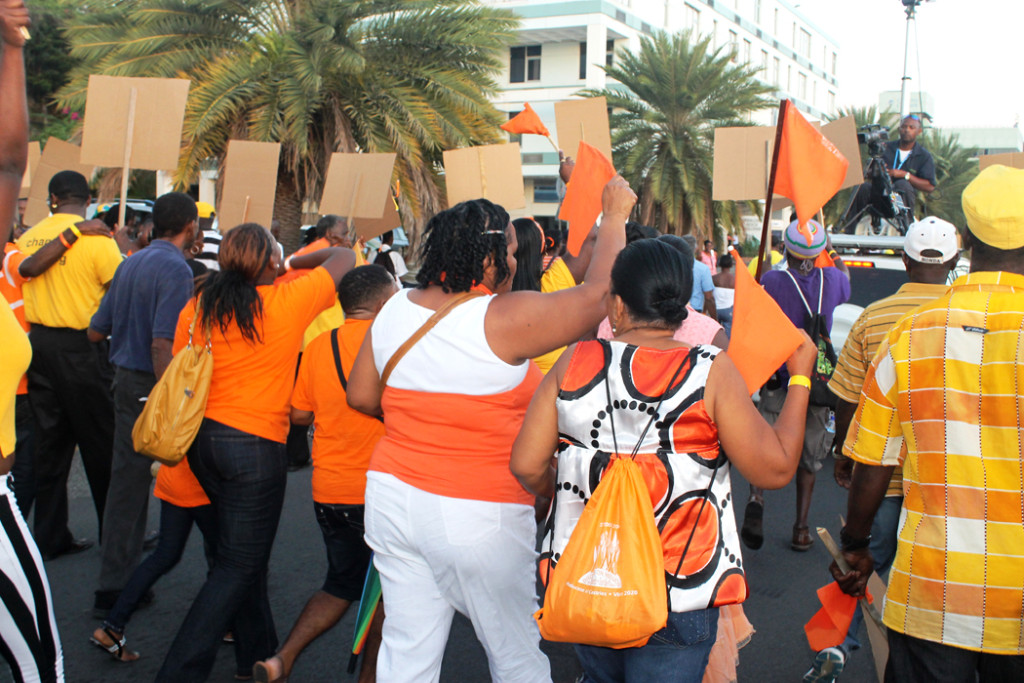 THE now-infamous definition of NICE (National Initiative to Create Employment) as was seen on a placard during the United Workers Party’s protest march last Thursday has generated much interest – and for obvious reason.

That the acronym – according to the placard – could now mean “Niggas In Charge of Employment” sends quite opposite the message than what the march’s organizers repeatedly told us was their real intention. It now turns out that that negative message on the placard has superseded the true purpose of the march.

I first noticed the offensive placard as its bearer was about to join the march near LUCELEC’s head office along the John Compton Highway. At the time, one of the party’s executive members was fervently trying to get marchers into formation. While taking photos of the front of the thickening and highly-vocal crowd, I happened to glace behind me. There was the fair-skinned middle-aged woman with two placards; one bearing the much-talked-about racial slur, the other bearing another definition of the Value Added Tax (VAT): “Vengeance Anthony Taking”.

Now while my camera’s lens is in perfect shape, I admit that the lenses on my eyeglasses are due for a replacement. But the not-so-NICE message was as clear as day for anyone else to see, especially those who organized the protest march. Based on what I’m being told, proper procedure elicits the direction and guidance of organizers to script, design and create placards for such occasions to ensure that the wrong message does not end up being the left, right and centre of a debate. I must admit, too, that having been present near the Red Cross building where the march began, I saw party members handing out yellow armbands to marchers. As to whether placards were given out as well, I cannot say with any certainty.

What I can say, however, is that immediately after the matter was brought to the attention of the UWP camp, a clearer message should have been sent. That no party executive seems bold enough to dissociate the party’s philosophy from the picketer’s placard sends the wrong message. Granted that free speech should always be preserved in any democratic society, inherent responsibility also comes with that inalienable right. But wrongs – however minor or major – need to be righted.

I don’t think I really need to explain what emotions are drummed up whenever the word “Niggas” – a variant of “Niggers” – can drum up among Black folks. History is replete with horror stories of Black people being denigrated by other cultures – ironically, even by their own, too – via the use of the infamous N-word. What befuddles me at this point is if the placard’s message – and let’s play Devil’s Advocate here for a few seconds – takes umbrage to Blacks being in charge of the NICE programme, then the real question is: Who should be in charge of NICE? You get my drift?

Now while both sides of the political divide would be engaged in attacks and counter-attacks based on the volatile placard episode, we need to understand that wrong is wrong regardless of who does it and when. In the same manner many people poured out sympathies for the beach vendor who recently alleged that a British restaurateur operating here spat on her, we need to look inwardly at times and see where we cause damage unto ourselves as well. The fact that the gentleman’s skin pigmentation is far lighter than the vendor’s led many people to suggest that racism was at play in the alleged incident. How ironic that the placard bearer last Thursday does not share the gentleman’s complexion or ethnicity!

The other sad part of last Thursday’s protest march is that while many people continue to squabble about whether it was successful or not, the evidence was there to prove that people came out, marched and made their voices known. That many of us still choose to ignore that people seem prepared to exercise their right to protest peacefully for what they perceive to be just cause should be worrying. Save for the negative message on that much-talked-about placard, Saint Lucians stood up despite being labelled as cowards most of the time. Whether or not their cause had any domino effect remains to be seen.

If you asked me, the organizers of last week’s protest march need to do the right thing by unambiguously correcting a flaw that occurred during their event. While they might well claim that they should not be held totally responsible for what went wrong during that protest march, I see no harm in them condemning the wrong signal that was sent via that placard. That’s just my opinion as I am not the authority on anything just as is the next person trying to convince me that they need my vote later down the road.