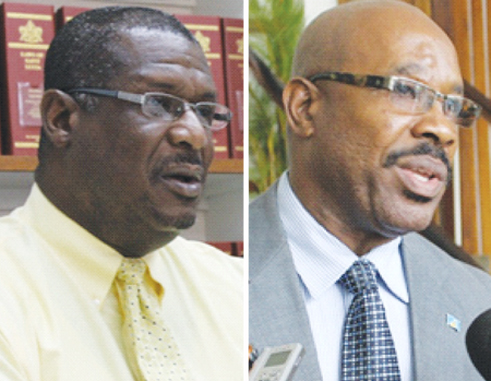 CASTRIES North MP, Stephenson King and Castries Central MP, Richard Frederick, say that while they embrace the need for the realignment of the island’s constituencies, they cannot ignore the added costs to taxpayers.

Speaking to reporters outside the House of Assembly Tuesday morning before Parliament met to discuss the proposed changes to the island’s constituencies, King and Frederick shared key concerns on the latest move.

At issue is the splitting of the Gros Islet constituency into three and the creation of the Castries North-East constituency, increasing the island’s constituencies from 17 to 21.

King said the boundary review became necessary as per the Constitution, and as such “there’s nothing wrong with it.” However, he hastily made the point that the added costs to the country need to be taken into consideration.

“When you look at the financial implications, it ranges between $200,000 and $500,000 a year,” King said. “So it’s really being able to justify the review that is being done now: how it is done (and) the constituencies that are being affected,” King said.

King said the affected constituencies, particularly Gros Islet, Babonneau, Castries East, Castries South-East and Castries North, were way more populated compared to other constituencies, necessitating the boundary review. The dollar factor, he said, must not be discounted from the equation, even though there should be some level of parity in representation.

“In principle, I support it. It is whether it is timely in a situation where the country is going through some economic times. However, what you are attempting to do with these realignments is to allow parliamentarians to have a more effective representation for the people they represent. You cannot have one parliamentarian representing 23,000 people and another one representing 4,000. In terms of economies of scale, it just doesn’t work. When you look at the land mass, the density, the terrain that you’ve got to travel, it needs some consideration,” King explained.

King also pointed to the pros and cons of the exercise, saying that both the government and opposition stand to either win or lose via the changes. Nevertheless, he hinted that the government would have proceeded with the review so as to favour their chances of contesting those seats.

“When you look at it in terms of the manner in which the cuts have been made, there are advantages and disadvantages for both the government and the opposition. One would anticipate that the government has done a tremendous amount of work in proposing those changes which eventually, I assume, will benefit them,” King said.

Frederick, however, was categorical in his non-support of the changes. He cited high unemployment and government’s limited fiscal space as reasons. Frederick, who was expelled from the United Workers Party’s last August, said that by increasing the number of constituencies, central government has now placed its coffers under more pressure over a long-term basis.

“I’m actually against this at this point, (especially) when unemployment is rising and our revenue is inadequate to essentially take care of our expenses,” Frederick said. “I wouldn’t mind if it was a one-off expense. But it will be a perpetual expenditure. You’re talking about salaries of parliamentarians and/or ministers, other office space to rent, constituency offices, and support staff. I mean, the list goes on and on and I don’t think we can fully appreciate the financial impact of such a decision.”

Frederick suggested that government cuts down on the number of constituencies so as “to permit local government to function more effectively”, effectively scaling back on the number of parliamentarians. At least in the interim, he will be against the latest move until the country’s coffers show signs of improvement, he said.

“At the end of the day, once a parliamentarian has been elected for two terms, then he/she has to be paid a pension for the rest of his/her life. So we’re looking at this just superficially. Like I said, the financial impact cannot be fully appreciated…At the end of the day, if we’re trying to close on the deficit gap, we cannot be operating in a way that would widen (it),” Frederick explained.

In his presentation to Parliament last Tuesday, Prime Minister Dr. Kenny Anthony said that while the cost factor for the new constituency changes remains a concern for many, the additional cost to the State for each new constituency’s representative and office is $89,440.92. In total, the additional four constituencies would cost the State $357,763.68, a 12% increase of current cost of parliamentarians, or a 0.07% increase in total recurrent wages and salaries.