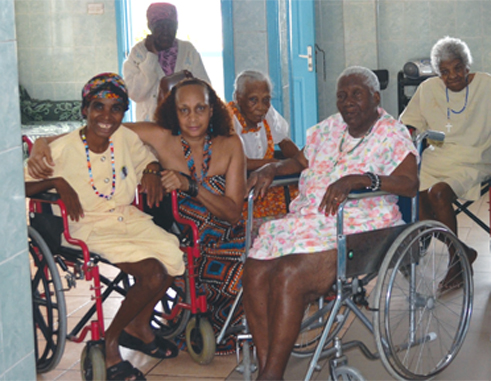 TWO seniors citizens homes have found a benefactor in a Saint Lucian living in New York who has given the assurance to mobilize material support on a consistent basis as a matter of duty.

Ms. Jeannette Dian John, formerly of Ravine Chabot, Castries, has been resident in the United States for over twenty years, and awakened to the realization that it takes one person to start a revolution. Since the December 2010 Hurricane Thomas Disaster, John said she was moved to play an ambassadorial role for her country, among ordinary New Yorkers in her neighbourhood and within her workplace.

A few weeks ago, the St. Lucy’s Home, Mother Theresa Missionaries of Charity and the Upton Gardens Girls’ Centre became the first beneficiaries of John’s donations drive. The two homes were overwhelmed when Dian John paid them a call to establish a relationship and deliver what she says will be a regular supply of cleaning agents, disposable diapers for the elderly, toiletries, teas and linens. The two homes each received several cartons of the goods. The Upton Gardens’ Girls Centre received personal gift bags containing an extensive range of toiletries for every girl in their charge.

On receiving his new partner and the materials, Sylvestre Phillip, Administrator of the St. Lucy’s Home said the home continued to operate through the benefaction of well-wishers and patrons, but that support on occasion was indicative of the challenging economic times. He explained that because the Home does not charge its clients, it receives all types of people in need from seniors to destitute to people with failing faculties.

“Therefore, for God to lay the Home on the heart of one individual who has taken this on as a personal commitment is indeed a blessing. Ms. John is in fact mirroring the mandate and vocation of the St. Lucy’s Home by extending a hand of sisterhood to people she does not know, and with no expectation of reward.”

According to John, the thanks go in equal measure to her co-workers, community people and businesses in the Brooklyn area who partner with her to support her in her ministry. She has acquired storage at her personal expense and will maintain the delivery of supplies on a quarterly basis, hopefully with support from shipping agencies and the authorities.