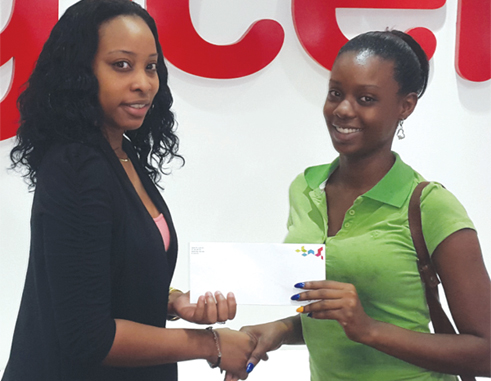 DIGICEL once again rewarded two more loyal customers from its December Text to Win Promotion. Marjorie Lambert and Agatha Herman both secured the first and second spots respectfully earning themselves $5,000 cash each.

As Digicel continues to invoke fun, excitement and engagement with its monthly text to win promotions, the Santa’s Helper Game in December promised nothing short of that. Customers played by simply texting the word “SHOP” to 7171 and collected as many tokens as possible to help Santa deliver gifts in time for Christmas. The more customers played the game the more tokens they collected and the more chances they received to winning one of two shopping sprees worth $5,000 each.

Lambert and Herman are no strangers to the game as they are regular players of the Text to win promotion. They were both able to keep the momentum which led them to capture the top two spots in the game.

Said Lambert, “Every month I look forward to playing the game to win with Digicel. I must admit, this time around it was very challenging to continue playing to remain at number one!”

Herman also shared her sentiments: “I really enjoyed playing the game. Winning with Digicel is always so transparent and it makes me like it even more”.

Both ladies were given the option to choose whether they preferred cash or the shopping sprees and they both chose the cash option. When asked what their intentions were they were speechless and had no idea at the time.

Marketing and Communications Executive Fiona Smith commented, “Digicel continues to create new and engaging ways for customers to win big every month. Being able to provide fantastic prizes that appeal to those who participate is always a win for Digicel. We encourage customers to continue to participate and enjoy the monthly text to win promotions for their chance to win extraordinary prizes.”